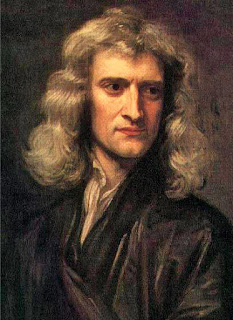 A symposium on Newton's less well-known work, which was largely religious. His religious work, even more than his science, was the center of his life.

Like nearly all of the great scientists of the Enlightenment, Newton was a passionate devout (albeit unorthodox) Christian. Copernicus, Galileo, Newton, Leibniz, Kepler, Faraday, Pasteur, Maxwell and countless other fathers of modern science saw scientific work as the investigation of God's creation.

Atheists had nothing to do with the rise of science, and atheist scientists today live off the fumes of Christian theology. Nations ruled by State Atheism-- the Soviet Union, Communist China, Pol Pot's Cambodia, Cuba, North Korea-- produce(d) no theoretical science of any value.

Why, if the world is not the product of a Mind and has no purpose and no logic in its creation, should we expect to find consistency and logic in nature?

Atheism is a parasite on science, as it is on every other meaningful endeavor.
Posted by mregnor at 4:32 PM