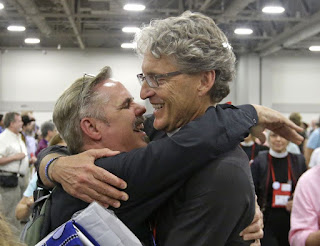 A great essay about the recent Episcopalian decision to perform gay marriages, by a former Episcopalian  priest (now Catholic):

You have to understand that what [liberal Episcopalians] do is dress up their secular atheism in religious language. Just like they dress up like Catholic priests and bishops, so they will don the garb of the religious believer and mouth those words, while all the time they have “re-interpreted” those words.
Thus a typical Anglican-Episcopalian will say he believes that Jesus Christ is the Son of God incarnate. What he really means is that Jesus was such a good man–even a perfect human being so that when we see him we see what God is like. He will say he believes in the Virgin Birth, but what he means is that “in some sort of marvelous way the girl Mary was especially pure and innocent” On Easter Day he’ll say “Alleluia! Christ is Risen!” What he means is that “Isn’t it wonderful how, despite his tragic death, the teachings of Jesus continued to live on in the lives of his disciples…”
You get the idea.
The Episcopal decision should therefore surprise no one who understand the worldview of the Anglican-Episcopal Church.

Read the whole thing. The onus is not on all Anglicans--there are good and holy people in that church. But there is much apostasy, and much abandonment of Christ for the secular world and its charms.
Posted by mregnor at 3:26 PM