At World Youth Day in Madrid, atheism flashes its cloaca.

Atheists were showing a little of their legendary 'godless love' at the Catholic World Youth Day in Madrid. 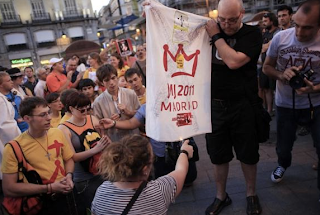 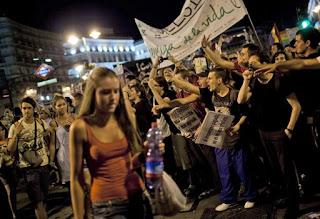 Mocking and spitting on kids who were praying the Rosary: 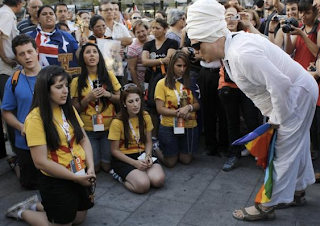 This from a young Christian girl at the celebration:


We had been wandering Madrid all day, chillin

There was this HUGE crowd of people so Seamus & Louise didn´t want to come check it out with us, they sat at a corner

So we knelt down and prayed a Rosary for them in the crowd and got surrounded by angry protesters, shouting and threatening and spitting and filming us and mocking us and trying to burn our flags.

Anyway, Dominic made us stand up because he felt threatened so we finished our Rosary standing but on the last decade, a fight broke out right next to us between the Catholics who had been standing behind us and and the protesters so some of the other Catholics lead us out of the crowd.

We went back and dropped our bags with Louise and this time Mim stayed back so it was just Me & Dominic & Greg & Billy who went back and prayed a second rosary on the side of the crowd and we got more of the same, people getting up in our faces screaming

We were met with a couple more of Juventutem but they left after we finished our second Rosary before one had an emotional breakdown.

Everyone left but the group I just mentioned above and we chanted BENEDICTO, BENEDICTO and VIVA PAPA and waved our Papal flag and so on up against the police line

Lots of people yelled at us still

Then, the police line broke and they charged at us and we had to run for our lives a little more urgently than after our Rosary

Expect more of this in the future, dear readers.

This is the cloaca secularism and even the liberal Catholic agenda brings us, allied as it is with secularism, because it undermines Christian values and therefore respect for human freedom and dignity.

Start think about this sort of thing every day.

Start getting used to the idea.

There is a strong thread of totalitarianism and hate that runs through atheism. Ultimately, it is hatred of God and of man. As atheism recoups from it's political downfall in Communism, it is reasserting itself in Western democracies in its characteristically malevolent way.

We need to recognize it, call it out, and defy it.