Marcia Morrissey at Patheos with a lovely tribute to Mother Theresa: 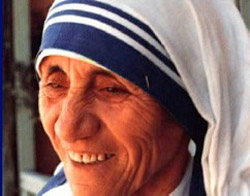 Decades of spiritual dryness did not stop Mother Teresa from believing and moving forward.

September 5 will be the anniversary of the 1997 death of Blessed Theresa of Calcutta. I always admired her work with the poorest of the poor. I grew up looking through the missionary magazines my grandparents had on their coffee table. They made an impression on me even as a small girl, and ever since then I have had a heart for missionaries.

When Ed and I began working with Marriage Encounter, we learned that Mother Teresa had met with a group of supporters from around the country in the dormitory buildings we leased for our organization. She had been there twice—in June of 1982, and again in 1984.

I spoke to Jerry, who—with his wife Marilyn—worked with Marriage Encounter from the early days and were privileged to meet Mother Theresa when she visited. His impression of her was that she was tiny, very friendly, and a hugger. She also was firmly in charge of what was happening. She was no pushover for a documentary crew that was following her around on her trip.

I started to think of her as our organization's unofficial "patron saint" and an inspiration for our mission helping marriages. I began to read as much as I could about her life and work. The more I learned about this tiny, tough and courageous nun, the more I appreciated her, and she became a personal model for me, in what God called me to do in my own life. Especially inspiring to me is one of her most famous quotes: "We cannot all do great things, but we can do small things with great love."

Born in Albania, she became a citizen of India. A Catholic nun, she felt her calling was to the world: "As to my heart, I belong entirely to the heart of Jesus."

She had a burning love for Christ, and all she wanted was, "To quench His desire for love and for souls." I've heard that in her chapels, next to the cross there is a plaque that says, "I thirst."

At 18, she joined the sisters of Loreto, and—desiring to become a missionary—left for India, to teach at a girl's school. For the first 20 years of her life as a nun, she happily served as a teacher, and later as the school's principal. She was known for her prayer life, love for her fellow Sisters and students, charity, courage, and hard work.

It was during a train ride from Calcutta to Darjeeling, for her annual retreat, that Teresa received her "inspiration," her "call within a call." She felt the Lord directing her, giving her a burning desire to satiate His thirst for love for all humanity, especially for the poor who didn't know of His love for them. It became the force of her life's work.

After almost 2 years of prayer, testing and discernment she was given permission to leave her convent to go out to minister to the poor, the sick, orphans, and the dying in the slums of Calcutta. Wearing her now famous white and blue-boarded sari she went out to find and serve Him in "the unwanted, unloved, uncared-for." After a few months she was joined by some of her former students.

On October 7, 1950 the Congregation of the Missionaries of Charity became officially established. Her work spread and expanded throughout the whole world, and not only to religious congregations, but even a lay apostolate—Co-workers of Mother Theresa—people of many faiths and nationalities, who shared her passion and heart for service to the sick and suffering.

She saw the face of God in every person, and in turn showed His sacrificial love for each soul.

A couple of weeks ago at a pro-life event I attended, a Priest told of working with her sisters and the poor they cared for. He said that he cleaned their toilets, helped care for the sick, and comforted the dying. Some fought and stole from each other because that was how they knew how to survive. The sisters would show them sacrificial love, and through their example over time they would respond to that love they never felt before.

Only after her death was it discovered that she suffered from what she called her "darkness," the "painful night" of her soul. She walked by faith even though she didn't "feel" God. She believed and gave her life over to Him in spite of this inner "darkness" and feeling of separation, which led her to an ever-deeper unity with Him. She experienced His thirst and desire for love so she could identify with the poor who felt unloved and unwanted: "The hunger for love is much more difficult to remove than the hunger for bread."

She faithfully and tirelessly worked for God, trusting that He was there even though she often didn't feel His presence. She took by faith, not by feelings or emotional experiences, the work she was called by Him to do.

I have a special respect and love for Mother Theresa. The story of the "Saint of the Gutters" has always inspired me. She earned the moniker because she would search the gutters of Calcutta for the destitute and the dying, and bring them to her shelter. If she could nurse them to health, she would. If she couldn't save them, she would stay with them, so they wouldn't die alone.  She would care for anyone who was destitute, sick, or abandoned. Her answer to abortion was simple: 'Give the babies to me'.

She had a long and very difficult 'dark night of the soul', as many deeply holy people do. The dark night has been known by Christian mystics for many centuries, and was described most beautifully by St. John of the Cross and by St. Theresa of Avila, his spiritual counselor and friend, in the 16th century.
Contemplatives understand the dark night as the clearing from the soul of human impressions about God, so God Himself may enter. We ordinary Christians understand God in necessarily superficial ways. When a soul gets near to God, these superficial understandings impede our direct experience of God, and need to be purged, so Reality can enter. It is a painful process, and it feels like abandonment and loss of faith. Yet it culminates in a union with God.
St John of the Cross-- the greatest Spanish poet-- wrote about the dark night and the union of the soul with God:

Once in a dark of night,

Inflamed with love and wanting, I arose

And went, as no one knows,

When all my house lay long in deep repose

All in the dark went right,

Down secret steps, disguised in other clothes,

In dark when no one knows,

When all my house lay long in deep repose.

And in the luck of night

In secret places where no other spied

I went without my sight

Without a light to guide

Except the heart that lit me from inside.

It guided me and shone

Surer than noonday sunlight over me,

And lead me to the one

Whom only I could see

Deep in a place where only we could be.

O dark of night more darling than the dawn!

O night that can unite

A lover and loved one,

A lover and loved one moved in unison.

And on my flowering breast

Which I had kept for him and him alone

He slept as I caressed

And loved him for my own,

And from the castle wall

The wind came down to winnow through his hair

Searing my throat with air

And all my senses were suspended there.

I stayed there to forget.

There on my lover, face to face, I lay.

All ended, and I let

My cares all fall away

Forgotten in the lilies on that day.

Blessed Mother Theresa-- hopefully St. Mother Theresa soon!-- is now with God, all her cares fallen away. May we follow her in service and spirit.
Posted by mregnor at 6:00 AM