Vox Day on "The Problem of Evil". 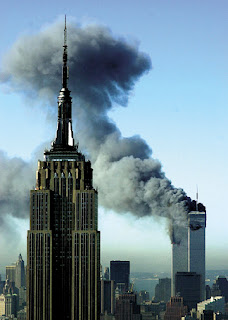 Internet Superintelligence Vox Day had a superb post from last Easter on evil. It is an appropriate reflection for today, the anniversary of 9-11, a day when evil slipped off its veil.


The problem with evil

The fact of the existence of evil troubles many individuals, religious and irreligious alike. Numerous strategies have evolved for dealing with it, from denying it like the Buddhists, enduring it like the Stoics, combating it like the Christians or redefining it like the Marxists. But regardless of the method one chooses, there is observably something to which all of these people from the panoply of religious and philosophical creeds are responding.

For centuries, philosophers have wrestled with the so-called problem of evil. They have attempted to define the nature and the character of evil and to provide explanations for the persistence of its existence. Many of them have been Christians and, indeed, the problem of evil is a major stumbling block to belief in the existence of God for many individuals. It is not uncommon for those struck by tragedy to question their faith, or even to lose it, since they are unable to balance the notion of personal suffering with the existence of a God who claims to love them.

The problem with this reasoning is that it is fundamentally at odds with the very heart of Christianity. Christianity does not postulate that the world is a good place. Jesus repeatedly declared that the world hated him and it would hate those who loved him. Christianity does not claim that God is presently in control of events; when Satan offered Jesus all the kingdoms of the world, Jesus rejected the offer but did not claim that it was spurious. And, indeed, Jesus twice spoke of "the prince of this world" as a being who was coming to kill him but would ultimately be driven out by Jesus' death.

Christianity does not have a problem of evil because it requires evil for the great historical event celebrated yesterday to have any meaning at all. Just as I wrote last week that the Crucifixion and Resurrection make no sense if man is not at risk of hell, they make no sense in a world that is not given over to evil. But if Christianity has no problem of evil, Christians most certainly have a problem with evil.
One hears much these days of the need for religious tolerance. But this is a false doctrine. Christians are not called to tolerate evil or to love wickedness. We are instead commanded to fight it, to wage tireless and unceasing war against it in all of its myriad forms. We are called to resist it in our own lives, to mitigate it in others and to destroy it wherever possible.

The West is belatedly discovering the truth about the love of money being the root of all evil. The arrogant nations of the post-Christian West put their faith in their wealth, only to learn that Mammon is a false and treacherous god. The great irony is that despite the world's rejection of God and its foolish embrace of evil, those who find themselves suffering the promised consequences of their actions will end up blaming God for them. Such are the perils of free will.

But there is no cause for Christians to be discouraged despite observing that the prince of this world still rules over his kingdoms and once-great Christendom is in decline. On that first Resurrection Day, not even the 11 remaining disciples believed, only those few grief-stricken women who had entered the tomb and were astonished to find it empty. From that meager seed, a mighty church of more than 1 billion believers has grown. And yet, it hardly matters if there is but a single man or woman remaining who is willing to stand up in the face of the world's hatred and give voice to the Good News, for even if we remain silent, we are told that the rocks themselves will thunder.

Christ is risen. He is risen indeed.

The Christian understanding is that the world is occupied territory. It is occupied by evil itself, in spiritual and personal form. We are passing through it, but we are not meant for it. We are in the world, but not of it.

Islamic terrorism is not an exception to the world. It is a manifestation-- one of many manifestations-- of the world, of a fallen world. God is soverign, but He permits freedom, even horrendous freedom. If we, who are created in His image, are to strive for good, we must be free to strive for evil. It's not a paradox. It's a necessary truth. That necessary truth showed itself with frightening clarity a decade ago.

Christ's call for us is to join Him, which means to join the fight. We must understand that we are on a battlefield, not our home.  The battle shifts. At times it is physical-- rushing up a staircase in a burning skyscraper to help innocents trapped. At times it is political-- standing up publicly for freedom and for the sanctity of human life. At times it is moral-- doing the right thing when every instinct we have is to do the wrong thing.

But we are not home yet. Our home has many rooms, and we will rest there, when we have finished the chores assigned to us in our time.

Let's remember all of the innocents who perished on that awful day, and remember with special gratitude those first responders who so courageously did His work, and finished the chores assigned to them in their time.