“... to have them niggers voting Democratic for the next two hundred years...” 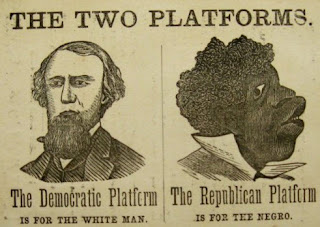 Michael Walsh reminds us about the sordid racism of the Democratic Party:

In order to escape their truly wretched past..., modern Democrats have adopted as an article of faith the bedtime story that, thanks to Tricky Dick Nixon’s “southern strategy,” the racists who had been the backbone of their party for the better part of a century suddenly switched to the GOP en masse some time around 1968, with the happy result that now all the racists are on the right. Presto — instant virtuousness and a clean slate!

It’s a lie, of course. But don’t take it from me, take it from my National Review colleague Kevin Williamson, who addressed this issue brilliantly last year:

Worse than the myth and the cliché is the outright lie, the utter fabrication with malice aforethought, and my nominee for the worst of them is the popular but indefensible belief that the two major U.S. political parties somehow “switched places” vis-à-vis protecting the rights of black Americans, a development believed to be roughly concurrent with the passage of the 1964 Civil Rights Act and the rise of Richard Nixon. That Republicans have let Democrats get away with this mountebankery is a symptom of their political fecklessness, and in letting them get away with it the GOP has allowed itself to be cut off rhetorically from a pantheon of Republican political heroes, from Abraham Lincoln and Frederick Douglass to Susan B. Anthony, who represent an expression of conservative ideals as true and relevant today as it was in the 19th century. Perhaps even worse, the Democrats have been allowed to rhetorically bury their Bull Connors, their longstanding affiliation with the Ku Klux Klan, and their pitiless opposition to practically every major piece of civil-rights legislation for a century.

As Kevin goes on to point out:

If the parties had in some meaningful way flipped on civil rights, one would expect that to show up in the electoral results in the years following the Democrats’ 1964 about-face on the issue. Nothing of the sort happened: Of the 21 Democratic senators who opposed the 1964 act, only one would ever change parties. Nor did the segregationist constituencies that elected these Democrats throw them out in favor of Republicans: The remaining 20 continued to be elected as Democrats or were replaced by Democrats. It was, on average, nearly a quarter of a century before those seats went Republican. If southern rednecks ditched the Democrats because of a civil-rights law passed in 1964, it is strange that they waited until the late 1980s and early 1990s to do so.

And yet this myth persists — in fact, it’s just about the only response today’s Democrats have to their own sordid history: pinning it on the other guy. It makes them profoundly uncomfortable that among the 21 who voted against the Civil Rights Act of 1964 can be found Albert Arnold Gore, Sr., the founder of the Hillbilly Dynasty; Robert “KKK” Byrd, the Conscience of the Senate; and Sleepin’ Sam Ervin of Watergate fame...

The Republican ascendancy in Dixie is associated with the rise of the southern middle class, the increasingly trenchant conservative critique of Communism and the welfare state, the Vietnam controversy and the rise of the counterculture, law-and-order concerns rooted in the urban chaos that ran rampant from the late 1960s to the late 1980s, and the incorporation of the radical Left into the Democratic party. Individual events, especially the freak show that was the 1968 Democratic convention, helped solidify conservatives’ affiliation with the Republican party. Democrats might argue that some of these concerns — especially welfare and crime — are “dog whistles” or “code” for race and racism, but this criticism is shallow in light of the evidence and the real saliency of those issues among U.S. voters of all backgrounds and both parties for decades. Indeed, Democrats who argue that the best policies for black Americans are those that are soft on crime and generous with welfare are engaged in much the same sort of cynical racial calculation President Johnson was practicing when he informed skeptical southern governors that his plan for the Great Society was “to have them niggers voting Democratic for the next two hundred years.” Johnson’s crude racism is, happily, largely a relic of the past, but his strategy endures.

It is wrong, I think, to understand the Democratic Party as the party of racism, although Democrats utterly own racism in American culture. But racism is not precisely what defines them. Democrats haven't the integrity to be just racists-- that is, mere racism, for all of its odiousness, ignorance, and cruelty, is at least an honestly held view. Racists actually believe something.

What characterizes Democrat Party policy on race-- from slavery to Jim Crow to the KKK to Bull Connor to William Fullbright to George Wallace to Al Gore Sr. to Jesse Jackson to Louis Farrakhan to Al Sharpton-- is race-baiting- the demagogic use of race to gain political advantage. It's in the circle of hell below racism. Lyndon Johnson blurted it: his plan for the Great Society was “to have them niggers voting Democratic for the next two hundred years.”

Race-baiting is working, still, among Americans of all races. And while I believe that we who abhor racism and who insist on a culture free of racial bias should continue to speak out against racism and race-baiting, we should be honest about our prospects and about the deeper cause of our nation's racial sickness.

We have voted for it again and again and again. We have elected race-baiting Democrats since the ante-bellum years of the 19th century, and the Democrat party today remains the party with the most numerous and loyal supporters. Americans have elected and reelected a President whose only claim to office is his race. If Obama were white, he'd still be an unemployed Alinskite hack dozing through Jeremiah Wright's sermons. Obama lacked, and still lacks, even minimal skills for high office, except amorality.

Democrats are vile, not stupid. Race-baiting in America works. It is perhaps the single most successful formula for electoral success in American politics. The Democrat party depends on it utterly. Without it, they would never win another national election.

Racial conflict is their oxygen. They replenish it incessantly.

Exhibit number one billion of the political elixir of race-baiting is sitting now at his desk in the Oval Office, reading your e-mail.
Posted by mregnor at 6:00 AM