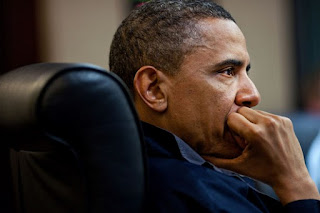 (Dissociated Press) In a rare personal interview, President Obama confided to this reporter his mixed feelings about Black History Month.

The President spoke in the Oval Office for what turned out to be a surprisingly candid and reflective discussion of his feelings about our nation's annual month-long celebration of African-American history.

(DP) Sir, as our nation's first black president, you've taken an active role in speeches and ceremonies that the beginning of Black History Month. But many commentators have noticed that during the second half of the month you seem less involved. How would you respond to that"


"I kinda' thought people might have noticed it. I had hoped they wouldn't."


I respect Black History Month and all, but I'm sort of 50-50 about it. Honestly, after two weeks into February my heart really isn't in it anymore."

He as silent for a minute, and continued.


"For the first half of the month, I was really inspired. I went to ceremonies, spoke at colleges, read Fredrick Douglas' speeches and a bio of Oprah in the evenings."

The President paused, as if to consider how much he should tell. His eyes glistened.


"But by the second half of the month, it just doesn't seem relevant to me any more. I'm sorry about the way it sounds. I'm just not into it. Yesterday, Michelle wanted the whole family to dress up like Marcus Garvey. I told her I had some Executive Orders to sign. I didn't really, but my head's just not in it after the first two weeks."

So what then does the President do during the last two weeks?


"Honestly, I just like to sit around on the Oval Office couch for the second half of the month. Last night  I put on a sleeveless tee-shirt and a John Deere cap and snuck out with a couple of Secret Service guys to Walmart, grabbed a six-pack, and we came back and watched WWF and Jerry Springer re-runs. It just felt right to me."