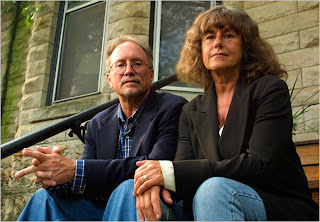 From an interview with Ayers and Dohrn at an Occupy rally:

I despise Bill Ayers and Bernadette Dohrn. They are violent criminals who organized the manufacture and detonation of bombs. If they had succeeded in their hard-left revolution, would have turned our nation into a communist hellhole. Ayers' most powerful bomb-- it prematurely exploded in a Greenwich Village townhouse on March 6, 1970 and killed the three people who were building it-- was probably intended to be detonated at a dance for young soldiers and their families who were graduating from basic training at Fort Dix in New Jersey. Ayers' bomb exploded when the three young Weather Underground bomb makers were wrapping nails in tape to create more deadly shrapnel.

Bill "World Without War" Ayers--  the most powerful member of the Weather Underground's "War Council"-- had even more sanguinary dreams. Ayers asserted  in the 1970's that 25 million Americans would have to be killed to bring his revolution to power.

His lovely wife Bernadette Dohrn had a similar taste for blood. Informed of the gruesome murders of Sharon Tate and Leno and Rosmary LaBianca by Charles Manson's gang, Dohrn, in a speech during the December 1969 Weathermen"War Council" meeting, said "First they killed those pigs, then they ate dinner in the same room with them, then they even shoved a fork into the pig Tate's stomach! Wild!"

It was a common gesture of greeting in Ayers' and Dohrn's Weatherman circles to spread two fingers to signify the fork.

The appropriate address for these unrepentant thugs would be a private room without the amenities as the government's life-long guests in Florence Colorado. Yet by the grace of our forgiving (and naive) legal system, these b*astards are free and prospering.

You can see why Ayers would dream of a "world without prisons".

At least until he gets the power to be the jailer...
Posted by mregnor at 8:58 PM