The wedding night must have been a blast...

Not a parody. From Shine: 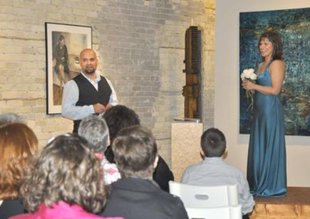 Here comes the single bride. Last week, Nadine Schweigert married herself in a symbolic wedding ceremony. The 36-year-old divorced mom of three wore blue satin and clutched a bouquet of white roses as she walked down the aisle before a gathering of 45 friends and family members in Fargo, North Dakota.

She vowed to "to enjoy inhabiting my own life and to relish a lifelong love affair with my beautiful self," reports Fargo's InForum newspaper . After the ring was exchanged with the bride and her inner-groom, guests were encouraged to "blow kisses at the world," and later, eat cake.

Schweigert, who followed the ceremony with a solo honeymoon in New Orleans, claims the wedding was her way of showing the world she's learned to love and accept herself as a woman flying solo.

"I was waiting for someone to come along and make me happy," she told reporter Tammy Swift . "At some point, a friend said, 'Why do you need someone to marry you to be happy? Marry yourself.'"

Not everyone was in agreement. Some of Schweigert's friends, who'd undoubtedly seen Carrie Bradshaw register for a pair of Manolos on season 6 of Sex and the City, thought she was going a little far with the single pride thing. Schweigert's 11-year-old son was her biggest critic: "He said, 'I love you, but I'm embarrassed for you right now.'"

This is clearly a polarizing issue: should a single person be entitled to the same wedding rituals as couples? Even Shine's editorial staff couldn't agree. So I enlisted Shine's Editor-in-Chief Jennifer Romolini for a friendly debate.

Point: Single people should have the same rights as couples

I believe everyone has the right to marry, regardless of sexual preference. For some people being alone is what feels most natural. Shouldn't they too be entitled to tax breaks? Don't they get a moment in the spotlight, the chance to rationalize a way-too-expensive dress, the two weeks off from work unquestioned, the ridiculous kitchen appliances they'd never have bought for themselves? It's time we did away with the stigma of 'old maids' and the belief that you're not really complete without a partner. Some people are actually proud of their solo relationship status and even ready to commit to it. Maybe if more people could reap the benefits of a wedding without a partner, there would be a lower national divorce rate. And while we're on the subject of weddings, consider the benefits of a one-person affair. No dueling families, no massive guest list, no pre-wedding am-I-doing-the-right-thing meltdowns. It may seem indulgent to plan a big reception for yourself, but imagine how much less stressful it would be for your guests? They can all bring dates. Nobody's seated with strangers and forced to ask 'do you know the bride or the groom?' If anything, I'd like to see more solo brides and grooms. Say you marry yourself and then cheat, the split would be free of fights, lawyers and custody battles. You get everything. Problem solved.
-Piper Weiss, Shine Senior Features Editor, Single

Marriage is about union, it's about partnership, most of all, it's about compromising on and sharing the things in your life that are hard to compromise on or share—from small "Everybody Loves Raymond" type clichés (the remote control! I like rom coms, he likes sports! Wocka wocka!) to deeper, more personal elements like beliefs, emotional vulnerabilities, and bank accounts. Self-marriage is therefore a deeply odd oxymoron. Singlehood means freedom, marriage means enclosure. Both can have serious value and can be cozy and wonderful (for proof of the wonders of single life, read Kate Bolick's excellent essay about being a 40-something and partner-free. But for real people? Getting married to yourself? Seriously, why not just embrace the glory of being single and live an awesome life full of not fighting over the covers or smelling someone else's weird smells? And have a party to celebrate it! To support this, I will show up and buy you two blenders, a rice cooker, a lacy keepsake frame, and small towels you don't know what to do with.
-Jennifer Romolini, Shine Editor-In-Chief, Married

"Maybe if more people could reap the benefits of a wedding without a partner, there would be a lower national divorce rate."

Good point. Divorcing yourself is not easy. How exactly could you pay yourself alimony? How could you split child custody (on weekends you'd have to pick up your own kids at your own house and drive them... to your own house.)

Would you have to refer to yourself as "my ex..."?

The saddest thing in this farce is una-couple's 11 year old son, who said "I love you, but I'm embarrassed for you right now." No doubt he would love to have a dad, and a complete intact family, and a mom who wasn't so selfish.

Marriage is a giving of self-- to your spouse, your kids, your family. It is intrinsically heterosexual and binary. Men and women are made whole by mutual love and self-sacrifice. That is not to say that two people of the same sex cannot love each other. They certainly can, but their union is not marriage. Marriage has a meaning. A sacramental meaning.

Gay marriage and its farcical congeners are merely the abolition of marriage, thinly disguised.
Posted by mregnor at 6:00 AM