A celebration of Justice Thomas 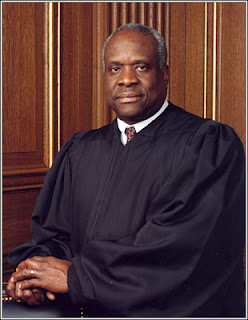 National Review On Line has a very nice symposium marking the 20th anniversary of Clarence Thomas' tenure on the Supreme Court. Thomas is an originalist, with a deep respect for the literal meaning of the Constitution and for the actual intent of the Framers. His opinions are eloquent and meticulously reasoned. He has disdain for the concept of "living Constitution", which is an unconstitutional tactic to bestow upon liberal shibboleths the patina of law. A "living" Constitution is no constitution, but mere rule by judges.

Thomas' confirmation hearings were indeed a "high-tech lynching". Liberals ambushed him with slander about decade-old sexual harassment. It was perhaps the pinnacle of filthy leftist politics. Thomas was a black man who left the liberal Democrat plantation, and the party of slavery-Jim Crow-lynchings-and government dependency doesn't like black men who think for themselves.

Thomas continues to be subjected to vilification by the left. He is a courageous man and a superb Justice. May God bless him, and I pray that he has many more years of distinguished service to our country on the Supreme Court.
Posted by mregnor at 6:00 AM