Take one prayer down, we put a thousand up 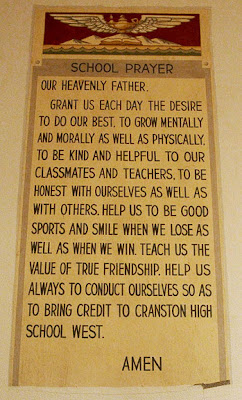 Atheists assert that this innocuous prayer on the wall of a Rhode Island High School for 50 years without controversy is unconstitutional and thus in violation of federal law. It is currently the object of a federal court suit.


From the Providence Journal:

PROVIDENCE, RI -- Lawyers for the American Civil Liberties Union and the Cranston School Committee were in federal court this afternoon, debating the constitutionality of a school prayer painted on the auditorium wall of Cranston High School West.

It's barely even a prayer. The only religious references at all are "Our Heavenly Father" and "Amen". Te rest is civic boilerplate.

It is much less religious than "God bless America", which the President says every time he opens his mouth, and Presidential proclamations for Thanksgiving and a National Day of Prayer. It is less religious than "... Endowed by our Creator with certain unalienable rights..." and "... that this nation, under God, shall have a new birth of freedom... , which are in every history textbook in the school, and countless prayers and invocations of God on national monuments, in political speeches, etc, etc.


No one in his right mind believes that these prayers are unconstitutional.

The hearing was delayed for about an hour, when U.S. District Judge Ronald R. Lagueux announced he wanted go to the school and see the prayer for himself. During his visit, he examined it close up, and sat in multiple seats in the auditorium, looking over at it.

What a farce. The judge should order a psychiatric examination on the atheists who brought this suit.

He also toured the school lobby, which has several banners hanging from the ceiling exhorting students to achieve.

A federal judge walks through a building deciding what people are allowed to say and not allowed to say. That's the atheist version of the First Amendment.

Lynette Labinger, the ACLU lawyer representing high school junior Jessica Ahlquist, said the painting was an unconstitutional state endorsement of a religious prayer. The statement was titled "School Prayer," she said, it begins with "Our Heavenly Father" and ends with "Amen."

"This is government speech," she told Lagueux. "This is a government prayer."

The Constitution restricts religion in only one way: "Congress shall make no law respecting an Establishment of religion". Nothing about "government speech" or "government prayer". The men who ratified the Constitution spoke publicly about religion and prayer a lot, and all government officials since have done so as well.

The Constitution only prohibits legislation establishing an official National Church, like the Church of England.

The Constitution also guarantees free exercise of religion and freedom of speech. Something that the ACLU brownshirts are fanatically trying to extinguish.

But Joseph V. Cavanagh, the Cranston School Committee's lawyer, said the mural, written and put up in the high school auditorium in the early 1960s, was essentially a secular call to students to do well and be good citizens with some religious references common to the time it was written.

"It's not in your face," Cavanagh said. "It's not forced on anyone."


Oh, perhaps I was unclear. Let me rephrase it:

Perhaps I was insufficiently precise. What I meant was:

Only the atheists are using force.


Jessica Ahlquist, a 16-year-old junior at the school, argues that the prayer, which has been on display at the school for 50 years, violates the First Amendment.

Ya' know, the Amendment that guarantees freedom of speech.

The Rhode Island Affiliate of the American Civil Liberties Union filed the suit on Ahlquist's behalf in April, alleging the prayer makes Ahlquist feel "excluded, ostracized and devalued as a member of the school community" because she does not share the religious beliefs on display. Ahlquist is an atheist.

She doesn't share the civic beliefs on display either. The only way little Fraulein Atheist won't feel "excluded, ostracized and devalued" is if people can only say stuff she agrees with.

Ahlquist's lawyers are seeking a court order to force officials to remove the prayer, which they claim violates the First Amendment's establishment clause, which bars the government -- the School Committee -- from promoting religious messages.

It's the Establishment Clause, not the Promoting Religious Messages clause. The prayer ain't a National Church. It's not an Establishment of anything. It's barely even a prayer.

American government officials have been 'promoting religious messages' for more than two centuries. Are we a theocracy yet?

One of the earliest soul-crushing religious messages was:

"We hold these truths to be self-evident; that all men are Created equal, and are endowed by their Creator with certain unalienable rights, that among these are life, liberty and the pursuit of happiness..."

That's the one that really pisses the atheists off.

In March, the School Committee voted to keep the prayer because it is a historic document created more than 50 years ago -- along with a school creed, school colors and a mascot -- to give the new school an identity and tradition, they say.

The School Committee wants to keep the prayer mural up, arguing the painting of the prayer, a gift from the school's first graduating class in 1963, expresses the givers' intent, not government policy. The committee also challenges whether Ahlquist was genuinely offended by it.

Never delude yourself that atheists have a shred of respect for human rights. Atheism is an assertion of power, against man no less than against God.  Every atheist's concession to moral law is a tactic, not a conviction.

Every atheist government has been a totalitarian hellhole. Atheists are inveterate totalitarians, and we ignore their efforts to silence us at our peril.

The proper response to this naked censorship is to make thousands of copies of the prayer, and let students distribute them all over the school. Kids giving to kids. They can't stop students from doing it. Put the prayer on the walls, on the doors, in the desks, on the floors, in every crevice they can find. Pay a visit to the courthouse and to the ACLU offices. Distribute the prayer everywhere they're trying to silence us.

Take one prayer down, we put a thousand up.