So this is one of the guys who created the sub-prime mortgage collapse...

Just in case you thought the President was the victim of a bad economy that he didn't help create: 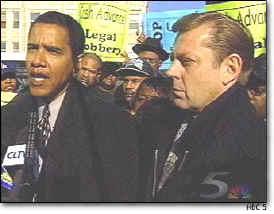 The Federal Housing Finance Agency announced late this afternoon that it had sued 17 large banks for risky mortgages.

According to a Reuters report, the FHFA’s suit was related to $41 billion in mortgage-backed securities issued by the 17 banks.

Obama is a Alinskyite hard-left Chicago pol who got elected by a MSM in the employ of the DNC. He was never vetted by the mainstream press, never held a real job, and acts now as if the presidency is an imposition on his golf game.

Now we find out that he sued banks to force them to make bad loans. When the loans failed and the economy crashed around them, Obama's teleprompter told us that he was The One to get us out of the jam.

It seems he helped get us into this jam. No politician who had anything to do with pushing the subprime mortgages-- and that includes Obama, Barney Frank, Chris Dodd, Nancy Pelosi, among many others, should currently hold office. Several (Frank and Dodd) should be under criminal investigation for their intimate personal and financial connections to Fannie Mae and Freddie Mac.

We'll get to express our opinion on this matter in a very direct way on November 6, 2012.
Posted by mregnor at 6:00 AM