Christians in Texas fight back against atheist bigots

Christians in a small Texas town are standing up to atheist bigots who are using legal threats to force removal of a manger scene that has been displayed on the courthouse lawn for decades.

The Texas Attorney General has offered to defend a Texas county under attack by a group of Wisconsin atheists who are demanding that a Nativity located on the lawn of the Henderson County courthouse be torn down.

Atheists in Wisconsin are outraged by the presence of a manger scene in a small town in East Texas. The display-- 1000 miles from the Freedom From Christians Religion Foundation headquarters-- is intolerable to the godless.


“Our message to the atheists is don’t mess with Texas and our Nativity scenes or the Ten Commandments,” Attorney General Greg Abbott told Fox News & Commentary. “I want the Freedom From Religion Foundation to know that our office has a history of defending religious displays in this state.”

The Freedom From Religion Foundation, an anti-Christian hate group operating under a patina of legal advocacy, routinely sues organizations and municipalities to remove reference to Christianity from public spaces. The organization's website proclaims "Reason's Greetings!" and "The Winter Solstice is the Reason for the Season", and brags of the use of legal force to censor Christians.

Bravo for Mr. Abbott for standing up to these brownshirts.


Abbott sent a letter to Henderson County Judge Richard Sanders offering whatever help he could provide in the event the county is sued. He also assured the judge that the county has no legal obligation to remove the Nativity scene from the courthouse grounds.

The Freedom From Religion Foundation, a group based in Wisconsin, sent a letter to Henderson County explaining that a local resident had complained and they wanted the Nativity removed.

If I write a letter Madison, Wisconsin officials demanding removal of the Freedom From Religion Foundation, do you think they'd do it?


“It sends a message of intimidation and exclusion to non-Christians and non-believers this time of year,” FFRF co-founder Annie Laurie Gaylor told television station KFDW.

She said the location of the Nativity — on the lawn of the courthouse in Athens, made non-Christians feel unwelcome.

“Anybody walking by that is going to say, ‘Hmmm. This is a Christian government building. I’m not welcome here if I’m not Christian,’” she told the television station.

'The donkey frightened me' complained the local atheist. 'I'm terrified of lambs too'.

One has the sense that it's really the baby that they hate.

To fight the Plastic Baby Jesus intimidation, FFRF sends a letter threatening litigation and forceful removal of the manger. Of course that's not intimidation. It's not like a plastic sheep on the lawn.

Here's the intimidating/excluding offense from which the atheist(s) needs legal protection. Note that the plastic cow does have horns... 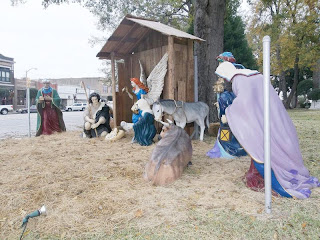 Yep. Non-Christians have avoided the center-of-town courthouse for decades while the manger scene is there.

Actually, the way to keep atheists out of the lawn would be to post a copy of the actual First Amendment, which guarantees freedom of religious expression. Atheists wouldn't be caught dead near it.

Many residents and ministers in this east Texas community have vowed to fight back. Hundreds of people are expected to attend a rally on Saturday to show their support for the Nativity. Nathan Lorick, the pastor of the First Baptist Church in Malakoff is one of the organizers of the rally. He called on residents to gather peacefully and in a spirit of love.

“It’s time that Americans stand up and take America back for the faith that we were founded upon,” Lorick told Fox News & Commentary last week. “We’re going to stand up and fight for this.”

Henderson County Commissioner Joe Hall called the attack “stupid” and said he’s going to do whatever it takes to stop the group from removing the Nativity.

The attack isn't stupid, anymore than the vandalism of synagogues or black churches is stupid. The attack is just intimidation and hate. The FFRF uses lawyers instead of spray paint and kerosine.

“I’ll tell you this — I’m going to fight this until hell freezes over,” Hall told Fox News & Commentary. “I hope and pray that we leave it up.”

Hall said he’s lived in the community for 35 years and as long as he can remember the Nativity has been erected on the courthouse lawn.

“It’s been up there for decades without any complaints,” he said.

Pastor Lorick said it’s time to draw a line in the sand — and start standing up for the Christian faith.

“Christianity is under attack in America,” he told Fox News & Commentary. “Our country is quickly heading down a direction which the Christian faith is taking a hit — it’s quickly becoming suppressed.”

The attorney general agreed with that sentiment.

“There has been an ongoing battle between the forces of atheism and the forces of those who are antagonistic to all things religious against those who recognize the religious heritage of this country,” Abbott said. “And by defending Nativity scenes, by defending the Ten Commandments and by defending students who try to say a prayer at a graduation ceremony, we’re trying to preserve, protect and defend what we know is perfectly legal.”

The FFRF website has this statement under "Our Legal Work":


The national Foundation has brought more than 40 First Amendment lawsuits since 1977, and keeps several Establishment law challenges in the courts at all times.

Anti-Christian bigotry is a full-time job.


The Freedom From Religion Foundation has sounded the alarm bell on a multitude of other First Amendment violations. We act on countless violations of separation of state and church on behalf of our membership and the public, successfully correcting many violations through persuasion and education.

"Successfully correcting many violations..." is a nice touch. Threats, intimidation, harassment, shakedowns. Sometimes they don't even have to sue you.

And "violations of separation of state and church" reverses the boilerplate "church and state". Wonder why the new word order? Maybe the old one reminded people of the Klux Klux Klan initiation oath that used the same motto-- "separation of church and state". FFRF donations would dry up if people made the rather obvious connection between the FFRF and better established hate groups.

We need to understand that Christians are under attack from atheist bigots. They hate us. It is organized and malevolent, and it needs to be fought. Bravo to the good folks in Henderson County for standing up for freedom and against the haters.
Posted by mregnor at 6:00 AM