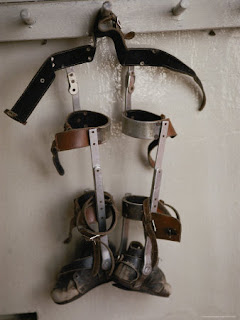 A beautiful song from Martina McBride, From Mihai Caragiu at RO-THEORIA.

The problem of suffering is difficult for all of us. Why do innocents suffer? Why do even the guilty suffer-- often the suffering seems disproportionate to whatever evil we could have done. In my day job, I see a lot of innocents suffering. I don't fully know why God allows it.

Many years ago, before I was a Christian, I was caring for a 6 year old boy with a malignant brain tumor who was dying. He was a sweet little boy, from a lovely family, and I had been his doctor since the moment of diagnosis, when he had a seizure, just a few months before. I had removed the tumor, and it had recurred twice, each time traveling to a different part of his brain. Now it was in many places, and all of our treatments had failed.

It was the middle of the night, and he was not going to make it to the morning. I came in to be with him and his family. I didn't know what to say. I asked the nurses to make sure that he had enough pain medication to keep him comfortable.

Our hospital's chaplain was there, a Lutheran pastor named Steve. We had become friends. We sat in the pediatric ICU, and I told him that I wanted to believe in God, but that I found this kind of suffering inexplicable. How could God allow it? What sense of all of this could Christianity possibly draw out?

Steve told me his own story, of his own illness in his agnostic days, when he was on a respirator and not expected to survive. He said that for the first time in his life (he was in his 20's) he prayed, and he asked God to spare him. He got an answer-- God told him that he would live, and that He wanted him to devote his life to ministering to the sick and dying. He became a pastor and a hospital chaplain.

"But why does God allow suffering at all?" I asked him.

His answer startled me. "He never said that we will not suffer. Suffering is a part of what it means to be human. He only promised us one thing: that we would never suffer alone. He will always be with us, and especially in our darkness. He suffered. He understands. Suffering draws us to Him."

That shook me. It haunts me still. There is something about suffering that is fundamental to existence. He uses it to draw us to Him. He is most present in our weakness and our agony. Of course, from the beginning He told us. He is most with us in the least of our brethren.

I know my combox will fill with the usual atheist sneers: 'if He loves us so, why didn't he just cure the kid instead of letting him suffer?'

My answer to them is: if God doesn't exist, why do you care? Nothing really matters, ultimately, in a Godless world. Why would dust lament the passing of dust?

I find, in the Christian answer, a gleam of real truth. The truth is Love Himself, and to suffer in darkness is to know Love more intimately, without anodyne. In our desolation we know Him in a way we could not have known Him in our complacency.
Posted by mregnor at 6:00 AM