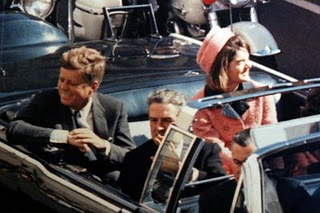 When I was in Dallas a few years ago, I went to the Sixth Floor Museum, in the Texas Schoolbook Depository from which Lee Harvey Oswald fired the shots that killed JFK. It brought back memories. JFK's assassination was one of my first clear memories of childhood. I was eight years old, leaving school to walk home, when my father picked me up in our car. He was very upset, and said that someone killed the president. I watched the assassination coverage on T.V. For the next year, my dad would tear up and cry when someone mentioned JFK.

When I was in the museum, I noticed a display on the 'culture of hate' in Dallas at the time of the assassination. It implicated conservatives and the right for the political climate at the time. I was angry. The right had nothing to do with Kennedy's assassination. Nothing. Kennedy was killed by a Marxist. Oswald was a man wholly of the left, who had defected to the Soviet Union, passionately admired Castro's Cuba, and even tried to kill prominent right-wing activist Gen. Edwin Walker several months before he killed Kennedy. The museum slandered conservatives by implying that anti-Kennedy political sentiment from the right had anything to do with his murder. If anything, conservatives would have been harder on leftist psychopaths like Oswald.

Yet the left can't seem to come to grips with the responsibility of one of its own for Kennedy's murder. Batshit conspiracy theories abound, all fabricated by leftie nuts (the CIA did it.... no, it was the FBI... no... no... it was the mob or... or... Lyndon Johnson...).

But if the JFK story has resonance in our era, that is not because it triggers the vaguely noble sentiments of affection, loss, and nostalgia that keepers of the Kennedy flame would like to believe. Even the romantic Broadway musical that bequeathed Camelot its brand is not much revived anymore. What defines the Kennedy legacy today is less the fallen president’s short, often admirable life than the particular strain of virulent hatred that helped bring him down. After JFK was killed, that hate went into only temporary hiding. It has been a growth industry ever since and has been flourishing in the Obama years. There are plenty of comparisons to be made between the two men, but the most telling is the vitriol that engulfed both their presidencies... America’s violent culture wars had started before JFK was shot. They were all on display in Oswald’s Dallas. At least in 1963, polling showed that only 5 percent of the country—a fringe—subscribed to the radical anti-government views championed by the John Birch Society and other militants of the right. These days, that fringe, whether in the form of birthers or the tea party or the hosts of Fox & Friends, gives marching orders to a major political party.

The only similarities between Obama and JFK is youth and Democratic party membership. They are otherwise radically unalike. JFK was a decorated war hero with a long record of public service in Congress and the Senate. Obama is a 'community organizer' who never held a genuine political position (he abstained on most votes in Illinois, and campaigned for the presidency as soon has he came to the Senate). Prior to the presidency Obama never had a real job.

JFK was a tax-cutter and a strong proponent of free market capitalism. He coined the phrase "a rising tide lifts all boats". Obama is a hard leftist and one-time A.C.O.R.N. lawyer who has worked feverishly to raise taxes, expand the federal government and worsen our national debt.

JFK was a defense hawk; he ran to Nixon's right during the 1960 campaign (remember the 'missile gap'), and he decisively confronted the Soviet Union in the Cuban Missile crisis. JFK was a fierce anti-communist and a close friend of Joe McCarthy's, and JFK was the only Democratic senator who did not support the Senate censure of McCarthy. Obama was mentored as a youth by communist Franklin Marshall Davis and began his political career with the support of violent leftists (e.g. Bill Ayers, Bernadine Dohrn) and hard left Chicago Alynskyites with whom Oswald would have felt right at home and of the sort that Jack Kennedy and Joe McCarthy despised and fought all their lives.

Succinctly, Obama is a man of the hard left. Kennedy was a passionate anti-communist tax-cutting military hawk-- a man of the 1950's and 1960's Democrat right-- which is a political philosophy nowadays referred to as... conservative Republican.

And what of Rich's bizarre assertion that the right is the source for America's political violence? Bullshit. The American left has always been extraordinarily and uniquely violent-- Obama's friend Bill Ayers-- in whose living room he began his political career--  is an admitted proud serial bomber. Virtually all American political killers and would-be killers have been one of two things:

Conservative Republicans have played no role in political violence in America. None. Frank Rich is nuts. And Barack Obama, like his fanboy Rich, shares more politics with Lee Harvey Oswald than he does with JFK.
Posted by mregnor at 6:00 AM