Pope Benedict feels the burdens of age and duty 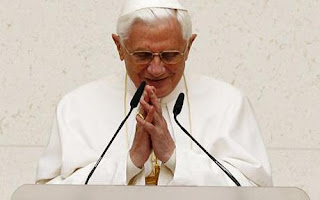 The Holy Father will be 85 years old soon, and many close observers have noticed the toll that the years and the crushing responsibilities are taking on him.

I was thrilled when he was elected pope, following the passing of Blessed John Paul II. Benedict is one of the great theologians of the 20th century. He is a brilliant man, with a genius for subtle and salient explication of theology, Biblical texts, and culture. His Introduction to Christianity is one of the best overviews of the rational and spiritual basis for the faith, and as pope he has written a beautiful series of theological commentaries ordered on Jesus' life and ministry. His Salt of the Earth, which is an interview with a journalist, is one of the best commentaries on modern culture and the Church's role that I've read. The only difficulty I've had with his books is that I've marked so many pages that the bookmarks are useless. Every page has one.

His service to the Church has been exemplary. For decades he did an extraordinary job as Prefect for the Congregation of the Doctrine of the Faith. He is a superb administrator, and he is directly responsible for the very effective measures the Church has taken to prevent sexual abuse. The Catholic Church is now the safest institution for children in America. The secular world should learn from his example.

The Church has been blessed by the succession of Pope John Paul II and Pope Benedict XVII. John Paul strengthened and sanctified the Church with his charisma and his courage. Benedict has consolidated John Paul's achievements with his intellect and his administrative skills.

Please pray that the Holy Father's health will sustain him in the great tasks that remain before him.
Posted by mregnor at 6:00 AM