Magdi Allam and the Catholic Church 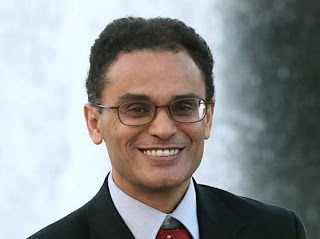 From John Allen Jr. at the National Catholic Register:


Amid the generally positive reaction to Pope Francis, Monday brought a dissenting note. The most celebrated convert of the Benedict years announced he has abandoned the Catholic church, primarily for what he sees as its overly indulgent view of Islam as well as distaste for the "papal idolatry" aroused by Francis' election.


Magdi Cristiano Allam, an Egyptian-born politician and essayist in Italy, rose to fame by styling Islam not as a religion but a violent ideology akin to fascism and communism. He was personally received into the church by Benedict XVI during the Easter vigil of 2008 and announced in the pages of Il Giornale on Monday that he now considers his Catholicism "expired in conjunction with the end of his papacy."

Allam adds that a positive reference by Francis to Islam in a recent speech to diplomats was the straw that broke the camel's back. He remains a Christian, but no longer identifies himself as Catholic.

Reaction has tended to splinter into three broad streams:

Unfortunately, in thinking about why Allam took this step, most people haven't gotten past the headline. If you consider the entire essay he published March 25 outlining his thinking, it makes for very interesting reading.
Allam says he's leaving Catholicism because of what he describes as four "physiological" features of the church he can no longer tolerate:

I agree with Allen that Allam is right that the first three characteristics are those of the Church. They are also those of Christ.

"Relativism" and "Globalism" used in the sense Allam uses it is a good thing; the Church must avoid sectarianism and exclusion to the greatest extent possible. Certain ideologies must be anathema-- Marxism, Nazism, atheism, for example-- but the world's only truly global organization must not be captive to pointless sectarianism.

And a tendency to be "do gooders"? Goodness gracious, that is what the Christian life is. We are called to radical do-gooding, by the original do-gooder Himself.

Some of Allam's criticisms of the Church's supposed accommodation with Islam resonate with me a bit as well, but I trust the Church. She alone has fought Islam for 1400 years. She understands the issues as no other entity does. Defiance has its place, for sure, and I share Allam's general assessment of the totalitarian nature of Islam, but lives and souls are at stake, and the Church's policy of engagement and respect has much to say for it.

I trust the Church.

Allum's fourth "physiological" feature which he can 'no longer tolerate' is raw nonsense. The Church is right on all of these issues.

The Church doesn't always do what I would be inclined to do. Before I became a Catholic, the Church and I were at odds on any number of things. But again and again I have come to see that She was right whereas I was wrong. I am inclined nowadays to listen and contemplate Her teaching.

The Church is a Spiritual Body as well a human institution, and Her wisdom so far exceeds mine as to bring me to my knees (and not only in Mass).

I am thankful that Allam remains a Christian, and I applaud his heroic and largely accurate critique of Islam. His voice is needed. But his duties as a individual Christian are not identical to the Church's duties, which must deal with issues on a far larger and longer scale.

Allam's apostasy suggests that he didn't understand the Catholic Church to begin with.
Posted by mregnor at 6:00 AM