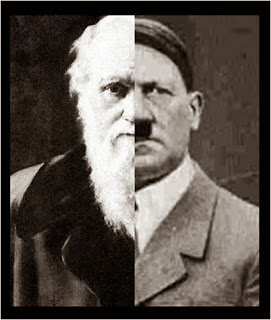 My friend Mike Flannery has a great post on ENV about the intimate connection between Nazism and Darwinism. Mike links to Richard Weikart's new paper on the Nazi-Darwin connection. Richard is a leading historian of Nazism whose book From Darwin to Hitler is a masterpiece and a landmark in the field. Flannery's post and Weikart's paper are must-reads.

Yet a few Darwin-Nazi deniers persist, unwilling to admit the truth about their "science" and the impact it has had on humanity. The denial of the Darwin-Nazi connection puts the deniers' embrace of an organization that demands the removal of the Star of David from a Holocaust memorial in a harsher light.

Just as communism is State Atheism, Nazism is State Darwinism.
Posted by mregnor at 6:00 AM