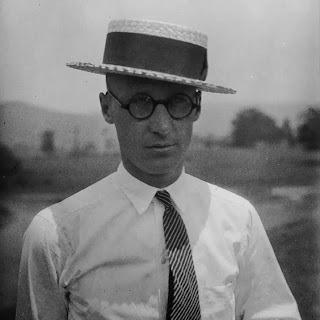 Darwinist Jerry Coyne wishes he could have shaken the hand of John T. Scopes.

The Dayton Ohio science teacher was the defendant in the Scopes "Monkey Trial" in Dayton Tennessee in 1925. The trial brought together William Jennings Bryan and Clarence Darrow, who battled over the legality and morality of Scopes' use of the textbook Civic Biology in science classes.

Scopes was convicted of violating the Butler Act, a Tennessee law that prohibited teaching evolution in public schools.

“A man of courage.” The trial was in 1925, so he was only 24 years old at the time. It’s amazing to realize that he was still alive when I was in my twenties. I should have sought him out to shake his hand.

As noted, the crux of the charge against Scopes was that he violated the Butler Act by teaching evolution to schoolchildren. Scopes textbook of choice was Hunter's Civic Biology (1914).

At this link are portions of the textbook that Scopes used in class, with excerpts as follows:

Evolution of Man. -- Undoubtedly there once lived upon the earth races of men who were much lower in their mental organization than the present inhabitants. If we follow the early history of man upon the earth, we find that at first he must have been little better than one of the lower animals. He was a nomad, wandering from place to place, feeding upon whatever living things he could kill with his hands. Gradually he must have learned to use weapons, and thus kill his prey, first using rough stone implements for this purpose. As man became more civilized, implements of bronze and of iron were used. About this time the subjugation and domestication of animals began to take place. Man then began to cultivate the fields, and to have a fixed place of abode other than a cave. The beginnings of civilization were long ago, but even to-day the earth is not entirely civilized.

The Races of Man. -- At the present time there exist upon the earth five races or varieties of man, each very different from the other in instincts, social customs, and, to an extent, in structure. These are the Ethiopian or negro type, originating in Africa; the Malay or brown race, from the islands of the Pacific; The American Indian; the Mongolian or yellow race, including the natives of China, Japan, and the Eskimos; and finally, the highest type of all, the caucasians, represented by the civilized white inhabitants of Europe and America. ...

Improvement of Man. -- If the stock of domesticated animals can be improved, it is not unfair to ask if the health and vigor of the future generations of men and women on the earth might not be improved by applying to them the laws of selection. This improvement of the future race has a number of factors in which we as individuals may play a part. These are personal hygiene, selection of healthy mates, and the betterment of the environment.

Eugenics. -- When people marry there are certain things that the individual as well as the race should demand. The most important of these is freedom from germ diseases which might be handed down to the offspring. Tuberculosis, syphilis, that dread disease which cripples and kills hundreds of thousands of innocent children, epilepsy, and feeble-mindedness are handicaps which it is not only unfair but criminal to hand down to posterity. The science of being well born is called eugenics. ...

Parasitism and its Cost to Society. -- Hundreds of families such as those described above exist today, spreading disease, immorality, and crime to all parts of this country. The cost to society of such families is very severe. Just as certain animals or plants become parasitic on other plants or animals, these families have become parasitic on society. They not only do harm to others by corrupting, stealing, or spreading disease, but they are actually protected and cared for by the state out of public money. Largely for them the poorhouse and the asylum exist. They take from society, but they give nothing in return. They are true parasites.

The Remedy. -- If such people were lower animals, we would probably kill them off to prevent them from spreading. Humanity will not allow this, but we do have the remedy of separating the sexes in asylums or other places and in various ways preventing intermarriage and the possibilities of perpetuating such a low and degenerate race. Remedies of this sort have been tried successfully in Europe and are now meeting with some success in this country.


Coyne's hero taught the schoolchildren of Dayton from a textbook with rancid eugenic racist hate, which was part and parcel of evolutionary theory during the first century of Darwinian ascendancy and remains the subtext of the Darwinian understanding of man today. The good folks of Tennessee, and the citizens of many communities across the country, wanted none of this venom taught to their children.

Coyne embraces his hero Scopes--"a man of courage"-- and would have liked to have shaken his hand.

Here's my question to Coyne:

Do you embrace what Scopes actually taught?


(Cross-posted recently at Evolution News and Views-- David Klinghoffer added a related post, and Coyne replied)
Posted by mregnor at 6:00 AM