Jerry Coyne: "... it’s rude to not respond to an evolutionary biologist who writes about a sign like this" 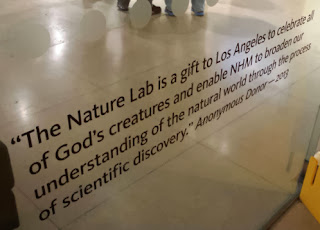 Jerry Coyne is in a snit because of a sign in the Natural History Museum of Los Angeles County. The sign reads:


"The Nature Lab is a gift to Los angeles to celebrate all of God's creatures and enable NHM to broaden our understanding of the natural world through the process of scientific discovery." Anonymous Donor 2013

Coyne had written this email to Dr. Jane Pisano, president and director of the museum, demanding the removal of the sign and implicitly threatening litigation. He didn't get a reply, which he considered rude.

Well rudeness bothers me as well, so I'll respond to Coyne, on behalf of the museum-- it's a public museum, and I'm part of the public:

Your email of December 4 is acknowledged. Thank you for your intemperate missive regarding the sign in our museum.

We''ll respond to your email paragraph by paragraph:


"A friend of mine who recently visited the new Nature Lab at your Museum forwarded me the attached sign, which ascribes the existence of animals to God."

We're glad your friend stopped by. He is free of course to express his opinion, just as our donor is free to do so and all of our patrons are free to do so. If you wish to express your opinion in our museum, you are welcome to contact our public programs office regarding donations to the museum. Rest assured that we would give your atheist viewpoint full consideration. Even fringe views from bigoted cranks are given a respectful hearing in our museum.


"I suspect, but don’t know, that this quote was one that came from the anonymous donor, as implied by the quotation marks."

That's what the quotation marks mean. Perhaps we should have been more clear and included a definition of "quotation marks" on the sign. We tailor our signage for a fifth grade reading level. It may prove necessary to lower it.


"Perhaps he or she insisted on this quote as a condition for funding, something that I think the Museum should have resisted strongly."

We don't doubt that you believe that we should have resisted using the quote. Thank you for keeping us informed about your opinion in such a timely fashion.


"As an evolutionary biologist, I object to the invocation of God... ."


"First, scientific evidence shows us that animals are not “God’s creatures,” but “evolution’s creatures.” Thus the sign gives the impression that God had a hand in evolution, and implicitly puts the Museum’s imprimatur on that sentiment."

Apparently you didn't misspeak. We were not aware of the God-disproving research to which you implicitly refer. Perhaps it was presented at a scientific breakout session at one of the magician-sponsored Amazing Meeting seminars held annually in Las Vegas. We are unable to keep current with all of the breaking new atheist science. Perhaps it was sandwiched in between the UFO talks and the Star Trek presentations.

We would be delighted to open a new wing of the museum devoted to scientific atheism. With your financial generosity, we would call it "The Jerry Coyne- Trofim Lysenko Wing". We are already planning a series of exhibits collectively titled "Scientific Atheism: Doing Science with the Parking Brake On", which will include exhibits on "The Darwinist Junk-DNA Scandal", "The Steady-State Universe Theory to Avoid the Implications of the Big Bang", and "Survivors Survived: Atheism's Creation Myth", scheduled to open early next year. A new wing devoted entirely to atheist junk-science would dovetail nicely.


"Second, it’s not perfectly clear that this quote comes from the donor (I didn’t get that myself on the first glance), and will certainly be misinterpreted by some people as the Museum’s own sentiments."

We really didn't expect the sign to be misinterpreted, given that early elementary schoolchildren usually visit the Children's Museum rather than the Nature Lab. Our apologies.


"Thus the sign is doubly misleading. Finally, the invocation of God in a public museum could be seen as be a violation of the First Amendment."

Your Jacobean jurisprudence would preclude public display of the Declaration of Independence at the National Archives, the invocation of God and the Ten Commandments at the Supreme Court and in innumerable speeches by presidents and legislators, as well as the quotations from Abraham Lincoln on the Lincoln Memorial and from Thomas Jefferson on the Jefferson Memorial. It would preclude all of the religious art on display in public museums across America. It would also preclude the display of crosses and stars of David on veterans' graves at national cemeteries.

Your quest for censorship is a bit quixotic, but the League of the Militant Godless might be of assistance to you. We notice that you did not enlist the assistance of the Freedom from Religion Foundation, a hate group that you've previously used to shake down people who invoke God. Perhaps their recent Holocaust denial lite made their agenda too clear even for you.


"Regardless of what the donor wanted, I think it abrogates our scientific principles to “celebrate all of God’s creatures” when that statement is, by scientific lights, palpably wrong."

The scientific evidence for God's non-existence would be of great interest to us. We were unaware that the Deity was an Object of scientific investigation, being supernatural and all.


"Would you have taken the money from someone who insisted that the gift celebrates “all of Wotan’s creatures,” or “all the creatures created by space aliens”? Those signs are just as scientifically supportable as what appears on the sign now."

We give due consideration to all requests from donors, even pagans, Raelians, and atheists.


"I recognize that Museums are strapped for funding, and do think that Nature Lab is a good thing."

Unless, it seems, that the exhibit doesn't meet your exacting standards of atheist dogma.


"But I don’t think it’s worth kowtowing to religious sentiments, and polluting the nature of science, simply to get money."

Kowtowing is not acceptable in science. I'm sure you understand why we have disregarded your threats.


The very existence of the sign, in fact, undercuts the mission of Nature Lab: to teach people how science is done.

Your email threats demonstrate nicely how your own science is done.


I needn’t remind you that science is done by ignoring God, and has never given the slightest bit of evidence for the intercession of God in the origin, evolution, and diversification of life.

We regret that we can't do more to comply with your demands. But rest assured, Jerry, that your email hasn't been futile. Your email suggests a moniker for marketing our new scientific atheism wing:


"Guillotines, Gulags and Gag-Orders: Atheist Science Since the 18th Century"

And please don't be dismayed by the fact that your email is remarkably ill-conceived and ill-tempered. We understand that you had no choice to do otherwise.


(Cross-posted at Evolution News and Views)