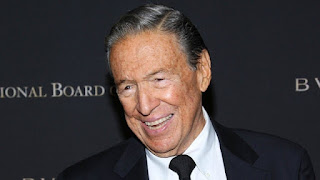 Mike Wallace passed away yesterday at the age of 93.

For many of us of a certain age, Wallace was an institution. He was a marvelous interviewer, very sharp, fearless, generally fair. Some of his interviews are classics-- Margaret Sanger, Frank Lloyd Wright, Ayn Rand, Louis Farakhan, mobster Mickey Cohen. His sessions were gentle interrogations, and you always came away with a sense that you understood something essential about the person-- Sanger's coldness, Wright's conceit, Rand's hubris, Farakhan's frightening manipulativeness.

Many of his classic interviews are on You Tube, and very worth a look.

His son Chris Wallace has much of his father's intelligence and integrity, and for my money he's the best interviewer on T.V. today.

Wallace's life was a remarkable life, well-lived. It's even more remarkable when one considers that he suffered greatly from depression on several occasions, and once contemplated suicide. One has a sense that private adversity brings out a depth that is often unsounded in those whose lives are untroubled.

Please keep him and his family in your prayers. His passing leaves a huge void. He made the world a much better and wiser place.
Posted by mregnor at 2:11 PM