"The media loved Obama to death..." 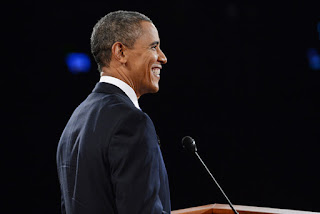 Naomi Emery on the media's "slobbering love affair" with The One and the price to be paid for it, beginning in Denver.


Obama had seen that his friends would protect him, and so he believed he could mail it in Wednesday, but this was the venue that could not be spun. No filter. No edits. No choosing what to put in or leave out. No shaping of the story. Just the story itself, rolled out in real time, sans narration, before 70 million American voters, undoing six years of hype and hysterics. It revealed one small, not all that keen academic, having been inflated by the narrators beyond all recognition, dissolving before everyone's eyes.

Emery is right. Media coddling-- heck, media creation-- of Obama has a shelf-life. It ran out last Wednesday.

But Obama has always been a media phantom, created entirely by the pundits of the Acela corridor. He's a liberal cipher. If not for the media, Obama would be not showing up for roll-call votes in the Illinois senate, instead of not showing up for the debate in Denver.