Jerry Coyne's got his Unterhose in a knot over the latest Act of Theocracy.

When I was in Kentucky, an alert student brought to my attention the fact that the state’s governor, Steven Beshear, had just proclaimed this November “King James Version of the Bible” month in Kentucky. Here’s the official proclamation ... 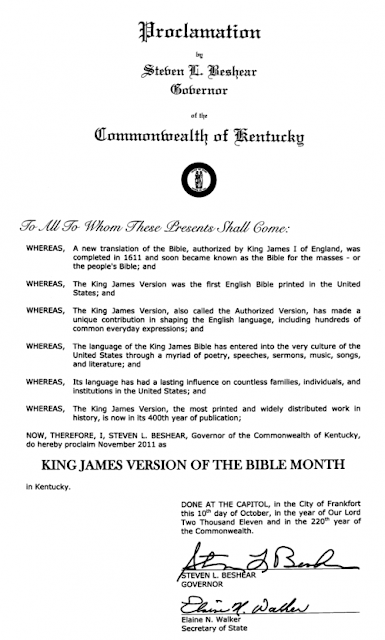 
Note how the language is twisted to emphasize the “secular” contributions of the Bible: how it has entered into American culture and has been the source of many now-familiar phrases. This “secular effect” ploy is often used to defend the placing of the Ten Commandments in courthouses and schoolhouses.

The "secular effect" is because the proclamation is... secular. It's not a "ploy". Each of the 'whereases' is objectively true. Secularly true.

Javert  Jerry furiously sniffs out Christianity. Theocracy is everywhere, even when it's not theocracy. The cognescenti can't be too careful.

Why not just make any statement about religion illegal, Jerry? Saves you all the trouble of distinguishing secular from theocratic. Just ban it all

Except for critical statements, of course. They'll always be zulassig in the godless-Utopie.

This is so clearly unconstitutional that it screams for an ACLU lawsuit and an injunction. Let’s hope the relevant lawyers and organizations (FFRF, are you listening?) get on this one.

The proclamation of the secular importance of the King James Bible is 'so clearly unconstitutional that it... screams'?

What is unconstitutional about the public proclamation of the secular importance of the KJB?

Why does this simple truth make you... scream?

Why be so candid about your hatred of all things Christian, Jerry? I expected at least a shred of public discretion. Raw totalitarianism is so ugly.


Ten to one they’d never proclaim “Qur’an Month” or “Torah Month” in Kentucky.

They would, Jerry, if the Qur'an had contributed substantively to our civilization.

And the Torah, which is (approximately) the first five books of the KJB, is implicitly honored in the proclamation, and rightfully so.

But you don't believe in that either, Jerry. You just hate it all. Even purely secular truths about the importance of our Christian heritage.

And you'll prosecute people in federal court to make them obey.
Posted by mregnor at 6:00 AM