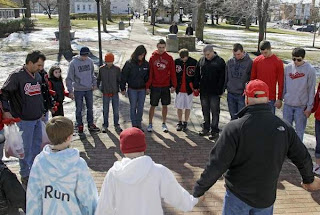 From Todd Starnes at Fox News:

Why is school prayer only allowed during tragedies?

It was supposed to be a fairly quiet week at Chardon High School.

The boys basketball team, the Hilltoppers, was scheduled to play a game Monday night. Parent-Teacher conferences were set for Thursday.

It was just a normal day in Chardon, Ohio.

A teenager – an outcast – armed with a gun – walked into the school cafeteria. In a matter of moments, five students were gunned down. At least one child died.

And at least one teacher chased the gunman out of the school – an act of bravery that possibly saved lives.

As police try to make sense of the senseless, the school superintendent called on people to pray.

It was a wise decision.

But perhaps lost in the chaos is the irony that in American public schools – people are not allowed to pray.

Liberals have successfully banished God from the classroom, replacing Him with the manmade god of secularism.

It’s a lesson I sadly suspect our nation’s educators will never learn.

Is the superintendent's call for prayer unconstitutional?

Is a teacher leading kids at Chardon High in a prayer for the victims unconstitutional?

Would a sign at the school saying "Pray for our classmates" be a crime?

Do prayers for the kids who were killed and injured make atheists feel "ostracized and excluded"?

Are atheists gonna call the ACLU on these people?

Should the police stop teachers and school officials at Chardon High from leading students in prayer?

If not, why not? Isn't organized prayer in school unconstitutional?

Let the atheists sue us.
Posted by mregnor at 6:00 AM