There is no place for racists on the Supreme Court 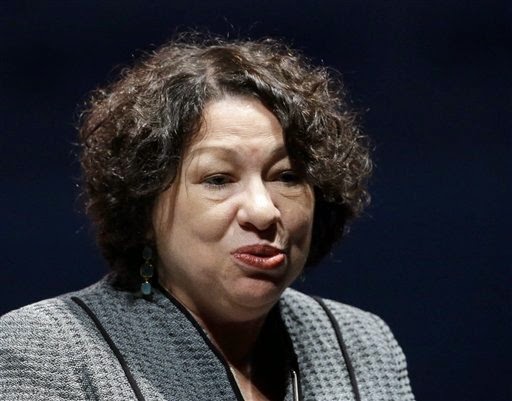 She called out her U.S. Supreme Court peers for their dismissive attitudes toward our nation’s troubling racial history and their wishful thinking on how far we have come in such matters.

"The way to stop discrimination on the basis of race is to speak openly and candidly on the subject of race, and to apply the Constitution with eyes open to the unfortunate effects of centuries of racial discrimination," Sotomayor wrote in a withering 58-page dissenting opinion.

Sotomayor has ruled in the highest court in the land that race should be a central factor in admissions at state universities. It is a plainly racist viewpoint.

How's that for 'speaking openly and candidly on the subject of race'?


Eight states have outlawed race as a consideration in admissions at state universities. The court’s decision opens the door to voting majorities in other states to reach the same conclusion, without considering the historical burdens many minority people still struggle with — a stark break from the court’s past role as a guardian of fairness and justice for all.

Consideration of historical burdens with which minority people still struggle is for the people and legislatures to consider, in referendums and legislation, respectively.

Sotomayor's job as a jurist is to rule based on the law and the Constitution, both of which she flouted.


By writing her brave dissent, Sotomayor illustrated for America what she meant in a controversial remark she made during her Senate confirmation hearings. Remember that quote? The one where she said that a Latina jurist might "reach a better conclusion than a white male who hasn’t lived that life."

That prediction has come true.

Bizarrely, Sotomayor believes that Wiselatinahood somehow serves as a basis for interpretation of the law and of the Constitution. Wisecaucasianhood, or Wisemalehood, or WiseWASPhood, seem not to have the same salubrious effect on jurisprudence.

Affirmative action applies not merely to college admissions, but now to judicial rulings, it seems.

I can't think of a more compelling reason to impeach her and remove her from the bench.

In this case, she showed herself to be a better guardian of a long legal legacy the high court set down in numerous prior decisions: protecting minorities from discriminatory laws enacted by electoral majorities. She accused her peers of abandoning that legacy. "We ordinarily understand our precedents to mean what they actually say, not what we later think they could or should have said," she scolded.

What the Constitution and the Civil Rights Act "actually say" is irrelevant to Sotomayor. Both demand colorblind application of the law. Sotomayor's opinion is based entirely on what she "later think[s] they could or should have said".

The fact is that Sotomayor sits at the terminus of a long line of bigots. The electoral majorities who have discriminated against minorities were always progressive Democrat majorities-- progressive Democrat politics has traditionally been the politics of Jim Crow and segregation. Even those rare Progressives who have abjured personal racist politics-- Hubert Humphrey comes to mind-- spent hours in smoky rooms cutting deals with their racist segregationalist buddies to gain power.

Sotomayor sits at the end of a long line of racists. Her judical ruling in favor of racism makes perfect sense in that light. Sotomayor's nightmare is a colorblind system of law.

The good people of Michigan disagree with her, and she is intent on forcing racial discrimination on Michigan despite the colorblind wishes of the citizens of that state.


The court’s ruling does not by any means decide the complicated issues of how race or race-neutral considerations like socio-economic status will be used in college admissions. What it does is change how those decisions can be made. Michigan’s anti-affirmative action law was passed in 2006 by ballot initiative, with the support of 58 percent of Michigan voters.

In her dissent, Sotomayor pointed out what should be obvious: "Under our Constitution, majority rule is not without limit." Race still matters in America. The burdens of past racial discrimination — in the case of African-Americans, hundreds of years of slavery, terrorization and apartheid — are still palpable in unequal life conditions. And racial, ethnic and gender discrimination continues to abide.

Read more here: http://www.kansascity.com/2014/04/25/4981992/affirmative-action-finds-brave.html#storylink=cpy
The Constitution and the Civil Rights Act require equal treatment under law without regard to race.

Not a single white applicant to college in Michigan has been convicted of violating the rights of a black person. Yet Sotomayor insists that the government disadvantage white applicants simply because of the color of their skin.

The attribution of culpability and privilege based on race is the definition of racism, and has no basis in law or ethics.

Sotomayor's job is to apply those crystal-clear principles of black-letter law, which, in accordance with the 14th Amendment, the 5th Amendment, and the Civil Rights Act, are color-blind.

No one gives a sh*t about Sotomayor's personal views on racism or history. Yet she has scandalously imposed her own bigoted views on her judicial decisions, in plain defiance of the 14th Amendment, the 5th Amendment, and the Civil Rights Act, all of which demand equal protection of the law.


Asserting merely that the majority should rule, even in cases where it stacks the deck against minorities, is not fair in America. It wasn’t fair a century ago when literacy tests and poll taxes were put in place, and it’s not fair in 2014.

You decide who the racist is.

...That was not all there was to her dissent, however. There was a minute detailing of this country’s long history of discriminatory law, of states and municipalities using the vote of the majority to limit the rights of the minority. It’s a long and lamentable list. Grandfather clauses, good character requirements, poll taxes and gerrymandering provisions all were concocted to keep minorities in their place, and all were invalidated by the court.

Affirmative action is racism, and is one more domino in a long line of progressive Democrat racist policies. It needs to end.


As the nation’s first Latina Supreme Court justice, she is in a unique position to speak to experiences that her colleagues can only read about — and apparently are all too ready to dismiss.

Justice Thomas-- a man who has fought racism all his life-- was the victim of a high-tech lynching by Sotomayor's racist compatriots in his confirmation hearings because he was a black man who strayed off the Democrat plantation. He doesn't have to read about racism. He has experienced racism first-hand, from Sotomayor's patrons.


She is also a rigorous jurist, and she won’t let the court abandon its proud and righteous legacy without putting up a fight.

Sotomayor is a rigorous racist, not a rigorous jurist, and nothing she wrote in that dissent has anything to do with jurisprudence. She is a bigot who has substituted her personal bigotry for law.

There is no place for racists on the Supreme Court.