For a little pre-Fourth of July Norman Rockwell-bashing from a pitifully misinformed lefty:

Strange isn't it, that Rockwell never painted a black person (that I've seen), never used his art to protest the racial oppression enforced in his America by Christian organizations like the Ku Klux Klan?

Here's a few of Rockwell's finest, Anonymous, for your Independence Day enjoyment: 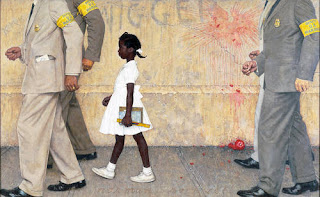 The Problem We All Live With
Norman Rockwell 1963. The young girl is Ruby Bridges, who integrated the New Orleans schools in 1960. 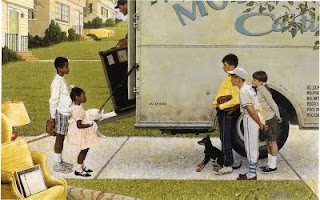 Negro In The Suburbs
Norman Rockwell 1967. An African American family moving into a white suburban neighborhood. 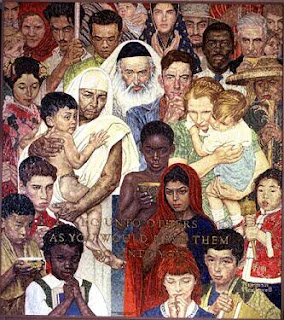 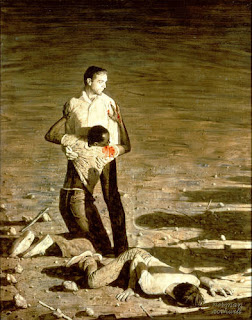 
"This idea of the dignity and worth of human personality is expressed eloquently and unequivocally in the Declaration of Independence. 'All men,' it says, 'are created equal. They are endowed by their Creator with certain inalienable rights, among these are life, liberty and the pursuit of happiness.' Never has a sociopolitical document proclaimed more profoundly and eloquently the sacredness of human personality."

What about the KKK? The KKK was the enforcement arm of the Democratic Party (what is your party affiliation, Anon?) for a century. They hated Catholic Republicans (e.g. me) only slightly less than they hated blacks.  I don't know of any problems they had with atheists.
Happy Independence Day, Anon. Don't forget to thank our Creator for your freedom.
Posted by mregnor at 7:00 AM