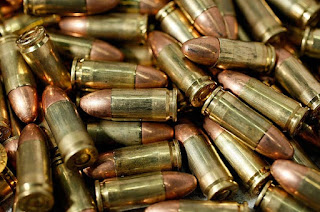 The Department of Homeland Security is set to purchase a further 21.6 million rounds of ammunition to add to the 1.6 billion bullets it has already obtained over the course of the last 10 months alone, figures which have stoked concerns that the federal agency is preparing for civil unrest.

A solicitation posted yesterday on the Fed Bid website details how the bullets are required for the DHS Federal Law Enforcement Training Center in Artesia, New Mexico.

An approximation of how many rounds of ammunition the DHS has now secured over the last 10 months stands at around 1.625 billion. In March 2012, ATK announced that they had agreed to provide the DHS with a maximum of 450 million bullets over four years, a story that prompted questions about why the feds were buying ammunition in such large quantities. In September last year, the federal agency purchased a further 200 million bullets.

To put that in perspective, during the height of active battle operations in Iraq, US soldiers used 5.5 million rounds of ammunition a month. Extrapolating the figures, the DHS has purchased enough bullets over the last 10 months to wage a full scale war for almost 30 years.

You don't have to be a paranoid black-helicopter survivalist type to wonder....

Don Sensing has some insights and suggests some explanations for the DHS' sudden purchase of enough bullets to shoot every American-- man, woman and child-- five times:


On Jan. 2, DHS awarded a contract to


...Evian Group Inc., an organization that was formed just five days before the announcement of the solicitation [in December].

As James Smith documents, Evian Group seems to be little more than a front organization and doesn’t appear to have any real business assets, a genuine physical address, a website, or even a phone number.

So not only is the DHS stockpiling decades of war's worth of ammunition - which means literally centuries of DHS usage - it's doing so through front companies that come into being to collect the contract checks and presumably disappear once the checks have been written. The real questions here are who owns or controls Evian Group and what is his/their connection to the Democrat party?

Again the question, Why is DHS buying all this ammo? Here are the answers I propose in order of my preference of accuracy:

1. To transfer enormous sums of money to politically-connected or -useful individuals. In other words, the massive purchases are just old fashioned, money laundering graft and corruption. It sure would be useful to know how much Evian was paid for the ammo, because my guess is that Evian's controllers are buying the ammo from manufacturers at discount, then marking it up at least 40 percent to sell it to DHS.

What ultimately happens to that 40 percent markup? It goes two places: the bank accounts of Evian's controllers get half and the other half is funneled through shell-corps, bogus non-profits and established foundations, finally to the Democrat National Committee and Democrat campaigns and causes.

2. To reduce the supply of ammunition available to ordinary Americans.

3. To shoot right-wing domestic "terrorists," although honestly the purchases so far exceed what might be remotely be needed for that even if these presumed terrorists ever, you know, actually started terrorizing, that I can't imagine this is much related to the reason for the purchases.

No, this is looting the public treasury, pure and simple, to keep the Democrat party in power.

Sounds like a hybrid of an aggregation of massive lethal force by a domestic surveillance federal agency and run-of-the-mill Chicago-Democrat-gangster money-laundering.

Do you think that there could still be an innocent explanation for the DHS ammo spree? A commentor on Rantburg has the last word: