Maybe the horse got his wings from the mud or the volcanoes.. 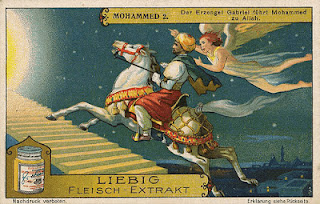 One of the more amusing conceits of atheists is that atheists are more rational than believers. Of course atheists define "rational" as "things atheists believe".  For example, atheists assert that the belief that the heart has no purpose is "rational".


... believing in miracles (including winged horses that carry you away to some glorious place) is not something I can abide; it defies all logic.


Now of course I'm not a Muslim, so I don't believe that Mohammed's Night Journey to heaven actually took place. Yet as a Catholic, I do believe in many miracles-- the Virgin Birth, the Incarnation, the Lord's healings, the Resurrection, among many others.

I do believe in miracles.

Atheists believe in miracles as well.

Atheists believe that all life arose spontaneously-- without purpose or intelligent agency-- from mud or perhaps underwater volcanoes. Contra Anonymous, I fail to see how abiogenesis is more "logical" than winged horses.

Christians: 'The Word became flesh and dwelt among us'.

Muslims: 'Mohammed flew to heaven one night on a winged horse'.

Atheists: 'Mohammed, all men, and all horses came from mud or volcanoes.'


Which one is more rational to you?
Posted by mregnor at 6:00 AM