Voyager 1 at the Heliopause 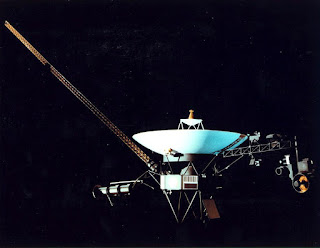 
Voyager has traveled so far that it is now near the heliopause. At the heliopause, the solar wind — the stream of charged particles that emanates from the sun and causes such phenomena as aurorae and the tails of comets — becomes so attenuated that it blends into the interstellar medium. The heliopause, in other words, is the farthest limit of the sun’s empire. Beyond is true interstellar space, the empire of the Milky Way.


A man-made spacecraft has entered interstellar space. Very very cool.
Posted by mregnor at 6:00 AM