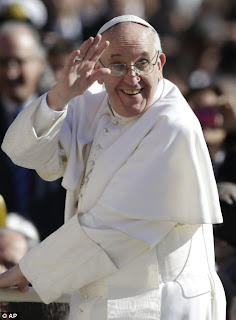 David Gibson at National Catholic Reporter has an interesting post about concerns about Pope Francis' pontificate from traditionalists and liberals in the Church.

[E]ven as the former Cardinal Jorge Bergoglio basks in this broad approval as Pope Francis, some constituencies in the Catholic church are cautious or even angry at his election, and their concern has only grown in the early days of his pontificate.


Gibson observes that some traditionalists are concerned with the Pope's informality and his love of the poor and his substantive criticisms of capitalism.

But the critique by the liberals is what I think will be the precis of Francis' pontificate:

"The election of a doctrinally conservative pope, even one with the winning simplicity of his namesake, is especially dangerous in today's media-saturated world where image too often trumps substance," the feminist theologian Mary Hunt wrote at Religion Dispatches.

"A kinder, gentler pope who puts the weight of the Roman Catholic hierarchical church behind efforts to prevent divorce, abortion, contraception, same-sex marriage -- as Mr. Bergoglio did in his country -- is ... scary," Hunt said.


That's the heart of it, and that is what I believe is the genius of Francis' election.

Traditional Catholic teaching on divorce, abortion, contraception, and marriage are of the same moral cloth as the love for the poor and sick and the disabled.

They are the same love and the same concern, applied to different realms.

Sexual sin is a war on the innocent-- on children in the womb, on children and mothers abandoned in divorce, on young people left emotionally and physically devastated by promiscuity and disease, and by the infestation of our culture with false "rights" to sexual irresponsibility-- really assertions of power and privilege-- that leave the poorest among us devastated. Sexual sin is an intimate affront. As Paul observed, sexual sin is the only sin committed in the body. The fruit of the revolution in sexual morals is Detroit, not Shangri-La. Wrecked families, dead children in Planned Parenthood dumpsters, single mothers struggling to raise their children and protect them from the self-vindicators who roam the streets at night.

The Pope's message is this: love for the poor, for the jobless, for the sick, for the oppressed, for the imprisoned, for the lonely, for the elderly, for the unborn, for the young whose lives are wrecked by promiscuity and abandonment, for men and women and children torn apart by fornication and abuse and homosexuality and divorce, are the same love.

The proclamation of love for all the poor-- the financially poor, the politically oppressed, the unborn, the very young and the very old, the disabled, the abandoned and divorced and sexually used-- is the heart of Christian morality.

To those who hate Christ and His Church, that proclamation is very scary indeed.