American jurisprudence is a freak-show-- indistinguishable from reality t.v. 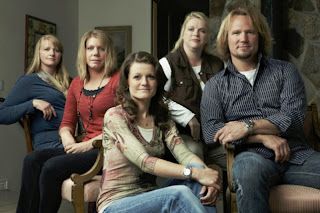 Joe Darger, who with his three wives detailed their life in the book "Love Times Three: Our True Story of a Polygamous Marriage," praised the decision and said it would change the future for Utah’s polygamists. He said that he learned of the victory Friday night when Kody Brown called him. The call was unusual — the two men don’t call each other frequently, he said — and when he learned of the ruling he felt "shocked."...

The Browns filed their lawsuit in July 2011, arguing Utah’s law violated their right to privacy. The family’s argument relied primarily on the 2003 U.S. Supreme Court decision that struck down the Texas law banning sodomy, which was celebrated by gay rights advocates...

"It just caught us off guard," he said. "It’s like Christmas came early."

It's gonna be a new kind'o Christmas, in our Age of Bacchanal.

We're gonna need more room in the stable for Mary's sister wives and Joseph's husbands. But the empty manger-- little Jesu was a burdensome unplanned pregnancy-- will free up some space.

And since sex and number are increasingly superfluous to matrimony, why obsess over species? The donkeys and sheep may soon play a novel role in family life.

It's just one federal court decision away.
Posted by mregnor at 6:00 AM