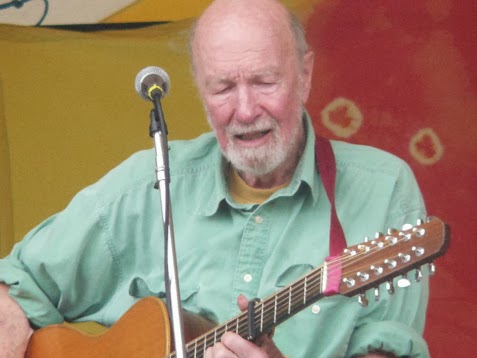 He was a real icon, and a complex guy. From all I've heard he was a friendly fellow. His musical accomplishments are protean. He was great on the civil rights movement, and some of his environmental work made things better (he campaigned to clean up the Hudson River, where I grew up, and it is sure a lot cleaner now than it was when I was a kid.)

He was atrocious on several other things. He endorsed an anti-Semitic boycott of Israel. Worst of all, he was a long-time member of the Communist Party who spent a half-century licking Stalin's boots and working tirelessly to advance communist totalitarianism.

Hitler didn't get nicer or less dangerous from August 1939 to June 1941, unless you're taking the Soviet perspective. The only asynchrony between Seeger's politics and Stalin's policies was when there was a delay in the telegrams from the Kremlin to the CPUSA.

In Seeger's later years he recanted his Stalinist water-carrying-- which is a manly thing to do-- but the tens of millions of victims of the ideology he loved might be a bit reluctant to let bygones be bygones. You know how stiff reactionary capitalist-roader imperialists can get.

In a sane world, Seeger would have spent the last 50 years (politely) relegated to the pariah section of humanity alongside Nazi-supporting entertainers and other totalitarian-worshiping artistes.

He will, however, be the undeserving recipient of all manner of hagiography and forgetting. But let's not be too hard on him. He had a lot of talents, some of which he used for good, some not. The same could be said for many of us.

We could all use a lot of mercy, and a lot of forgetting. I sure need it.

May God forgive his sins, and bless him.
Posted by mregnor at 6:00 AM