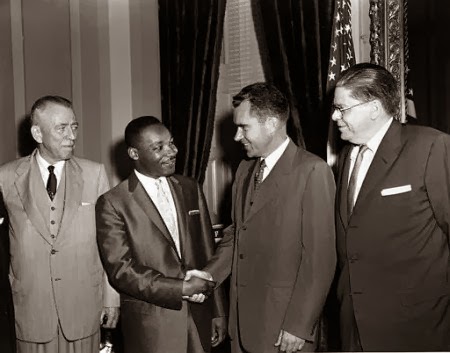 It was the first civil rights legislation passed since Reconstruction.

Nixon was a champion of civil rights. He fought hard for civil rights as Vice President under Eisenhower, and he was instrumental in desegregation throughout the United States as President. Even after the Brown decision in 1954 and the presidencies of Kennedy and Johnson, very little was actually done by Democrats to achieve desegregation. When Nixon took office in 1969, the vast majority of black children in the South still attended segregated schools. Shortly after his inauguration, Nixon personally interceded in the desegregation program, and by mid-1970 the vast majority of black kids in the South attended desegregated schools. With admirable skill and moral resolve, Nixon reversed 200 years of school segregation quietly and without violence in less than a year and a half.

There’s no doubt about it—the Nixon administration accomplished more in 1970 to desegregate Southern school systems than had been done in the 16 previous years, or probably since. There’s no doubt either that it was Richard Nixon personally who conceived, orchestrated and led the administration’s desegregation effort. Halting and uncertain before he finally asserted strong control, that effort resulted in probably the outstanding domestic achievement of his administration.


While Republicans walked the walk on Civil Rights, Democrats spun the spin and set up an exculpatory alternate history that bizarrely dominates the discussion to this day. The real history of racism and segregation in the United States is the history of race-baiting Democratic Party and Progressive politics (the second iteration of the KKK had very close ties to the Progressive movement), and the real history of the Civil Rights Movement is the history of the tireless efforts of courageous black leaders working with Republicans and conservatives to achieve desegregation and a color-blind society.

That history continues today.
Posted by mregnor at 6:00 AM