"He cornered 7-year-old Miriam Monsonego, the daughter of school principal Yaacov Monsonego, and shot her in the head. " 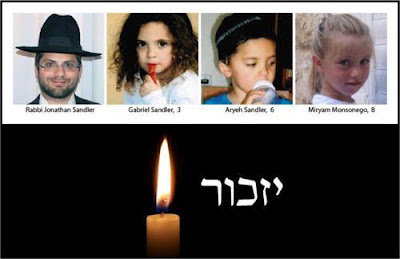 Last week a gunman named Mohamed Merah burst into a Jewish school in Toulouse and methodically executed a Rabbi, his two children, and another little Jewish girl. The last little girl-- Miryam Monsonego, who was 8 years old-- tried to run, and the killer's gun jammed. So Mohamed Merah held Miryam by the hair until he got out his other gun and shot her in the head.

These horrendous murders of Jews in France have a terrible resonance. Once again, Jews in Europe are being targeted, as they have been targeted for decades in the Middle East and were targeted 70 years ago in the worst crime in human history. The implicit anti-Semitism of much of the modern European elite, and the explicit anti-Semitism of the European Islamic mainstream, is rising to act. I fear that this is the beginning of genocidal anti-Semitic violence that will engulf Europe, as it has already engulfed the Levant.

This is only the most recent in a spate of anti-Semitic violence in Europe and North America. In 2006 a young Jewish man named Ilan Halimi was kidnapped in Paris by a gang of Muslims, sadistically tortured for three weeks, and murdered.

We need to fight this. Not with violence, except where necessary by lawful authorities to ensure the safety of Jews, but with compassion and defiance and tenacity. We need to stand up for our Jewish brothers and sisters in Europe and in Israel and throughout the world.

Please keep the families of the Ozar Hatorah School in Toulouse in your prayers. Send condolences to the school in Toulouse if you can. Let them know that you stand with them, and that an attack on Jews anywhere is an attack on all of humanity. Talk to your Jewish and non-Jewish friends about this. Spread the word. Express your concern to the French government (their actions have been, as best I can tell, laudable). Speak out against anti-Semitism loudly and unequivocally. Call it out-- and call it what it is-- whenever you hear it. Don't ignore it. Blog about it. Call out people who spread hate-- whether it is Islamists who preach raw hate against Jews or fellow-traveling Western anti-Semites who hypocritically attack Israel for defending herself against atrocities while minimizing the culpability of the perpetrators of the atrocities. Let your legislators know that the security of the Jewish people generally, and Israel specifically, is important to you.

Please keep Rabbi Sandler and his two beautiful children and little Miryam Monsonego and their families in your prayers. Let this atrocity awaken all people of good will. Almost 70 years ago, we made a promise to our Jewish brothers and sisters, and many millions of us intend to keep it.