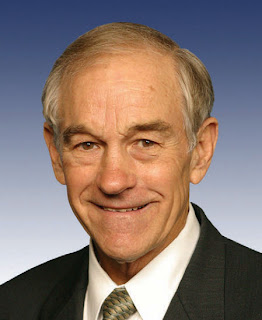 Pat Buchanan has a (characteristically) wise essay on Ron Paul:

Twenty-one percent of his $2.4 to $5.5 million was in real estate, 14 percent in cash. He owns no bonds. Only 0.1 percent is invested in stocks, and Paul bought these “short,” betting the price will plunge. Every other nickel is sunk into gold and silver mining companies.

Bernstein “had never seen such an extreme bet on economic catastrophe,” said the Journal.

“This portfolio,” said Bernstein, “is a half step away from a cellar-full of canned goods and 9-millimeter rounds.”

“You can say this for Ron Paul,” conceded the Journal. “In investing as in politics, (Paul) has the courage of his convictions.”

Indeed, he does. Paul’s investments mirror his belief that the empire of debt is coming down and Western governments will never repay — in dollars of the same value — what they have borrowed.

And here we come to the reason Paul ran a strong third in Iowa and a clear second in New Hampshire. He is a conviction politician and, like Barry Goldwater and George McGovern, the candidate of a cause.

Aware it is unlikely he will ever be president, the 76-year-old soldiers on in the belief that this cause will one day triumph in a party where he was, not long ago, seen as an odd duck, but a party where today he speaks for a national constituency.

It is easy to understand why the young are attracted to him. There is a consistency here no other candidate can match.

Republicans may deplore the GOP Great Society of Bush 43. Paul stood almost alone in voting against every Bush measure. By two-to-one, Americans now believe the Iraq War was a mistake. Paul, alone among the candidates, opposed the war.

And because his campaign is about a cause larger than himself, it is a safe bet he will not quit this race until the last caucuses have met and the last primary has been held.

Prediction: Paul will go into the Tampa, Fla., convention with more delegates than any other candidate save the nominee of the party.

There is a gnawing fear in the GOP that Paul will quit the party when the primaries are over and run as a third-party candidate on the Libertarian or some other line in the November election.

Not going to happen. Such a decision would sunder the movement Paul has pulled together, bring about his own and his party’s certain defeat in November, and re-elect Barack Obama.

Paul would become a pariah in his party, while his son, Sen. Rand Paul, who would be forced to endorse his father over the GOP nominee, would be ruined as a future Republican leader.

Why would Dr. Paul do this, when the future inside the GOP looks bright not only for him but for his son?

The course Ron Paul will likely take, then, is this.

Commit to this nomination battle all the way to Tampa, contest every primary and caucus, amass a maximum of delegates.

If Jon Huntsman, Rick Perry, Rick Santorum and Newt Gingrich lose in South Carolina, they will lose in Florida, and begin to peel off and drop out, for none is a cause candidate and each will soon come to realize that his presidential aspirations are done for now if not for good.

Their departure will leave the Republican contest a Romney-Paul race, giving Paul half a year on the campaign trail to increase his visibility, enlarge his following, grow his mailing lists and broaden his donor base.

In return for a commitment to campaign for the ticket, Paul should demand a prime-time speaking slot at the convention and use the speech to emulate Barry Goldwater in 1960 when he admonished conservatives at the convention to “grow up,” so that “we can take this party back.”

Assuming the nominee is Mitt Romney, should he win in the fall and Paul has campaigned for him, Paul will not only have a friend in the White House, but be a respected figure in the party with a constituency all his own.

Most important to Paul are the issues he has campaigned on: a new transparency and accountability for the Federal Reserve, a downsizing of the American empire, and an end to U.S. interventions in foreign quarrels and wars that are none of our business.

Whether Paul goes home to Texas when his last term in Congress is over in January 2013, or whether he remains in Washington in a policy institute to advance the causes he believes in, his views will be sought out by the major media on all the issues he cares about.

Moreover, his fears of a coming collapse, manifest in his portfolio, could come to pass, making of Ron Paul a prophet in his own time.

I have great respect for Ron Paul. I agree with him on most issues, more so than with any other candidate.  The recent tempest about his supposedly racist comments made in a newsletter in the 1980's is, as best I can see, nonsense. Paul expressed some viewpoints that could have been phrased more effectively, but they are not racist viewpoints. The fact that much of the critique about these views comes from liberal democrats who derive their political power from race-baiting is a hoot.

Ron Paul's integrity, fiscal sanity, and foreign policy prudence are a much needed palate-cleanser to the Washington bacchanal. I think that Buchanan is right that Paul will work to increase his influence in the Republican party, rather than set out on a third party run that will do nothing but assure the reelection of a man who represents all of the venality and thuggery that Paul has fought against for so long.
Posted by mregnor at 6:00 AM