A sad and shabby time

Pithy commentary on the lynch mob mentality about the Trayvon Martin killing:

The conduct of race hucksters like Al Sharpton and Jesse Jackson and the hysterical rush to judgement by the media and many people across the country and the media is execrable. 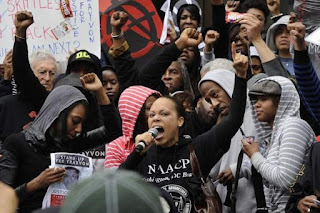 Trayvon Martin's killing is a tragedy, regardless of what Martin was doing or not doing as he walked down the street. The evidence so far suggests that he was doing no wrong. George Zimmerman was wrong to grab his gun, hop in his car, and confront Martin. The "stand your ground" law in Florida may have made this tragedy more likely, and seems to me to be an ill-conceived law that should be repealed. Each of us has a moral and legal obligation to avoid violence, even if we believe we are 'in the right'. The duty to flee, rather than the right to stand your ground, seems to me to be the wisest basis for law in a peace-loving society.

Although Zimmerman's armed pursuit of Martin is, in my view, inexcusable, it is not clear that this is a racial crime, or even a crime at all, rather than a horrendous cascade of violence brought about by one man's reckless zealotry. Zimmerman may well have been within his rights (but not his right mind) to pursue and confront Martin. If he and Martin struggled, as it seems, the presence of a gun in the mix turned a confrontation caused by Zimmerman's recklessness into Martin's tragic death.

The facts are just beginning to be gathered.

Yet the race mongers are busy, threatening Zimmerman's life, circulating wanted posters, spreading the incendiary claim that this is a racial crime, and generally fanning hate. Note the absolute silence of this same crowd when young black men die daily in heartbreaking numbers on the streets of Chicago and New Orleans and Washington D.C.. They don't bat an eye at black men killing black men in war-zone numbers. There's no race-mongering to be conjured from our inner city abattoirs. Nothing for the professional haters to profit from.

All parties in this sad mess-- politicians and the media especially-- have a responsibility to call for peace and prudence and to insist that the facts precede judgement. We should be calming racial acrimony, not kindling it.

Regardless of the venality and the lynch mob mentality, Trayvon's death is a horrendous tragedy, and we should pray for Trayvon and for his family. I do note, sadly, that Trayvon's mother has found the strength amidst her mourning to apply for a trademark on her son's name.

A sad and shabby time.
Posted by mregnor at 6:00 AM