A suggestion for George R. R. Martin on his anti-voter-ID rant 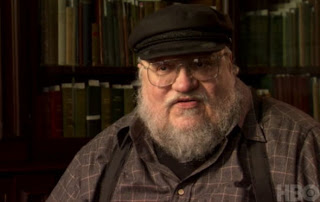 Game of Thrones author George R. R. Martin has this post on his blog:

"Show Us Your Papers"

I am way too busy these days for long political rants.

But I would be remiss if I do not at least make passing mention of how depressed, disgusted, and, yes, angry I've become as I watch the ongoing attempts at voter suppression in Ohio, Pennsylvania, Florida, Iowa, and other states where Republicans and their Teabagger allies control key seats of power.

It is one thing to attempt to win elections. But trying to do so by denying the most basic and important right of any American citizen to hundreds and thousands of people, on entirely spurious grounds... that goes beyond reprehensible. That is despicable.

It would really be nice if there were still some Republicans of conscience out there who would stand up and loudly denounce these efforts, a few men of honor and integrity for whom "win the election" does not "win the election at any cost." There were once many Republicans I admired, even I disagreed with them: men like Everett Dirksen, Clifford Case, Henry Cabot Lodge, William Scranton... yes, even Barry Goldwater, conservative as he is. I do not believe for a moment that Goldwater would have approved of this, any more than Robert A. Heinlein would have. They were conservatives, but they were not bigots, nor racists, nor corrupt. The Vote Suppressors have far more in common with Lester Maddox, George Wallace, John Stennis, and their ilk than they do with their distinguished GOP forebears.

The people behind these efforts at disenfranchising large groups of voters (the young, the old, the black, the brown) are not Republicans, since clearly they have scant regard for our republic or its values. They are oligarchs and racists clad in the skins of dead elephants.

And don't tell me they are libertarians either. No true libertarians would ever support a culture where citizens must "show their papers" to vote or travel. That's a hallmark of a police state, not a free country.


A proviso: this "Tea-bagger"(yours truly, that is) is a Martin fan. I'm just finishing Game of Thrones, and I marvel at Martin's skill as a writer. He is a joy to read. His work is beautiful and engaging.

His politics seem to be otherwise. I am dumbfounded by celebrity elites who argue against voter ID laws. Goodness gracious, our entire society depends on intricate systems of identification in order to obtain access, and rich famous folks like Martin use these ID systems more than most. Do you think that you can get onto Martin's estate/property without ID? Just show up at his front gate, he'll let you in, no questions asked, right? Can you walk out of a bookstore with one of his fine epics without presenting a valid credit card to pay for it? How about walking into his office and demanding a nice face-to-face meeting with the famous author, without providing any sort of identification?

Voting is the most most important political act we do in our democracy. If we must "show our papers" (our credit card) in order to buy Martin's books on credit or show some sort of ID to walk into Martin's home, surely we ought to show that we are legally entitled to vote in order to walk into a voting booth.

Verifying that people are voting legally isn't voter 'suppression'. It's just integrity. All of us-- Martin no less than each of us-- insist on ID in all sorts of transactions. We should ask no less when voting.

So George believes that asking people to show ID is a hallmark of a police state? How about this, George: let people walk into stores and take your books on credit, without showing credit cards or ID or anything. Trust them to pay on credit, without identifying themselves. Just like they were walking into a polling place without the need to identify themselves.

Do the same thing with your money that you demand we do with our democracy.