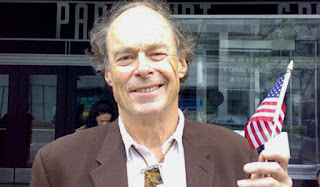 Alexander Cockburn passed away last week at the age of 71.

Cockburn was a left-wing gadfly and a columnist at the Nation. He was a brilliant writer, and in my view was one of the few coherent and thoughtful voices on the far left. I disagreed with much of what he wrote, but he wrote well and made his case with precision and passion.

Cockburn was not a doctrinaire leftist. In recent years he alienated many of his comrades with viewpoints most commonly associated with the right.


... over the years he mellowed, even as he sometimes denied it. He became an American citizen in 2009. That same year he became a columnist for the paleoconservative magazine Chronicles, a platform he used to rail against American imperalism, big-business corruption, and imbecilic leftists. A conservative would have agreed with large parts of most of his columns. He was a passionate defender of gun rights and believed a well-armed society was a bulwark against anyone who wanted to control a population.

He became a true heretic to the Left in 2007 when he declared that supporters of global warming were promoting a fraud: Their “pied piper,” he said, was a “hypocritical mountebank” named Al Gore. (Cockburn was an enthusiastic supporter of Ralph Nader against Gore in 2000.)

My last meeting with Alex came in 2009, when he showed up in New York at the Heartland Institute’s conference featuring dozens of global-warming skeptics. We stepped outside of the conference for a long chat. He cheerfully recounted all the places where he had been denounced for his global-warming views. “They hate me because I tell the truth: The environmental Left wants to deindustrialize America so they can exercise political power and control people’s lifestyles,” he told me.

“I’ve felt like the object of a witch hunt,” he said as he described how the Left treated him after he dissented from the global-warming “consensus.” “One former Sierra Club board member suggested I should be criminally prosecuted.”

Cockburn was at the conference collecting material for his forthcoming book A Short History of Fear, in which he planned to explore the link between fearmongering and climate-catastrophe proponents. “No one on the left is comfortable talking about science,” he told me. “They don’t feel they can easily get their arms around it, so they don’t think about it much. As a result, they are prone to any peddler of ideas that reinforce their preexisting prejudices.”

Cockburn understood that the global warming hoax is the ultimate power-grab by elites.

He even had doubts about the culture of death:

The liberals are howling bout the unfairness of these attacks, led by Sarah Palin, revived by her “Death Panel” talk and equipped with a dexterous new speech writer who is even adding footnotes to her press releases.

But what is a conservative meant to think? Since the major preoccupation of liberals for 30 years has been the right to kill embryos, why should they not be suspect in their intentions toward those gasping in the thin air of senility? There is a strong eugenic thread to American progressivism, most horribly expressed in its very successful campaign across much of the twentieth century to sterilize “imbeciles.” Abortion is now widening in its function as a eugenic device. Women in their 40s take fertility drugs, then abort the inconvenient twins, triplets or quadruplets when they show up on the scan.

In 1972, a year before the Supreme Court’s Roe v. Wade decision legalized abortion on demand nationwide, virtually all children with trisomy 21, or Down syndrome, were born. Less than a decade later, with the widespread availability of pre-natal genetic testing, as many as 90 percent of women whose babies were pre-natally diagnosed with the genetic condition chose to abort the child.

One survey of 499 primary care physicians treating women carrying these babies, however, indicated that only 4 percent actively encourage women to bring Down syndrome babies to term. A story on the CNS News Service last year quoted Dr. Will Johnston, president of Canadian Physicians for Life, reacted to the American College of Obstetricians and Gynecologists (ACOG) pre-natal testing endorsement as another step toward eugenics. “The progress of eugenic abortion into the heart of our society is a classic example of “mission creep,’ ” Johnson said. “In the 1960s, we were told that legal abortion would be a rare tragic act in cases of exceptional hardship. In the ’70s abortion began to be both decried and accepted as birth control. In the ’80s respected geneticists pointed out that it was cheaper to hunt for and abort Down’s babies than to raise them. By the ’90s that observation had been widely put into action. Now we are refining and extending our eugenic vision, with new tests and abortion as our central tools.”

Cockburn was a rare beast on the left-- a man of intelligence and integrity. He fought for human dignity, as he understood it. Towards the end of his life, he understood it pretty well.


Please keep him and his family in your prayers.
Posted by mregnor at 6:00 AM