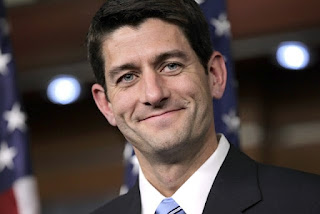 Walter Russell Mead has a fine essay on Mitt Romney's choice of Paul Ryan as his running mate for vice-president.

With Governor Romney’s selection of Wisconsin Congressman Paul Ryan as his running mate, the vague contours of the presidential race have suddenly become sharper. Up until now, partly because Romney’s image has been so fuzzy, we were looking at a referendum on President Obama rather than a clear-cut contest between political philosophies. Now, given Ryan’s prominence as a budget hawk and entitlement reformer, the public has a choice to make...

2012 looks like an election between two united parties who will both be enthusiastic and both be convinced that the fate of the nation hangs on the November result. That’s a good thing, on the whole, for the country. Whatever else can be said about our electoral politics, nobody can argue that they are inconsequential or that real issues have disappeared. This is a serious election about important affairs and the two sides will both be offering a coherent vision of American values that allows voters to make a clear choice.

But if both parties are offering a clear vision of their values, I’m not yet sure that either party has what the voters want most. From the Democrats, they want some idea about how the entitlement state and the blue social model more broadly can actually be preserved. The fiscal trajectory does not look good; how exactly do Democrats plan to pay for all the programs they want to protect and extend?

From the GOP, they want something else. How is this new economy going to work? How will middle class Americans benefit from all these tax and spending cuts? What will the GOP put in place of Obamacare and the current entitlement program? Appeals to capitalist ideology and American exceptionalism are all very well and they will likely hold the GOP base together and deliver high turnout, but to win over swing voters, Romney and Ryan will likely have to come up with a little bit more in the way of showing how Americans can still get the benefits they most want and need from a shrinking and fiscally sustainable federal government.

Romney’s selection of Paul Ryan may or may not help him in the Electoral College. But the selection has made this a better election, clarifying the issues and giving the country something more consequential than attack ads and gaffes to think about. We will have to wait and see whether Governor Romney helped himself with this choice; he has, however, helped the country and that seems like a good start.


I really like Ryan. He's a brilliant honest conservative with guts. He's also a devout pro-life Catholic-- what's not to like? He insists that we confront and solve our nation's fiscal problems-- problems that threaten to destroy our democracy and our freedoms if they are allowed to grow unchecked. Unlike so many politicians, Ryan is a man of courage and integrity.

The Democrats will savage him. He has a very clear long public record, and the left will use every weapon it can imagine to destroy the man. There will be commercials of an actor who looks like Ryan pushing grandma off a cliff, poor people starving while an actor who looks like Ryan laughs, etc. The politics will be filthy. They have already run an ad accusing Romney of killing a woman because of his work at Bain. They will try to eviscerate Ryan. And the mainstream media, in the thrall of a 24-7 Obama-orgasm, will offer their free services in the ad campaign. It will be ugly.

But Romney's courageous choice means that this will be a consequential election. The choice is stark. It speaks well of Romney that he has the insight and the guts to nominate Ryan.

The election will be a war, but highly educational and fascinating. Expect all the ugliness the left can muster to be on full display. But there will be some delightful entertainment.