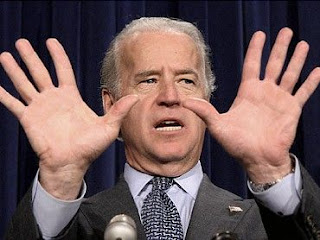 Erick Erickson has a fine post on Joe Biden's batshit claim that Romney wants to put black people back in chains.


In fairness to Vice President Biden, I supposed I should have a full post for our collective crazy uncle in the attic turned Vice President. The man from Delaware claimed that Republicans want to put people back in chains. Considering there is only one group of people ever put in chains in this country, it is clear he was race baiting...

Inciting racial animosity for political gain has been the Democratic playbook since the Democrats were, well, not to put too fine a point on it, putting black people in chains.

'Inciting racial animosity' is a fine synopsis of Democrat Party politics, from the antebellum South through today. I think it is a mistake to think that all pro-slavery pro-KKK pro-Jim Crow pro-lynching Democrat pols personally hated blacks. Many did, undoubtedly, but personal hatred presupposes a modicum of conviction, however heinous.

But the Democrat party has never been, and is not now, a party of conviction. It is a party of opportunism, embracing slave owners and Grand Kleagles and lynch mobs and Black Panthers and Jesse Jackson with open arms.

The Democratic Party is the party of race-baiting. It is the thread that runs from Preston Brooks through  Nathan Bedford Forrest to George Wallace to Al Sharpton to Joe Biden. What unites Democrats through the past two centuries is the use of race hate and fear for political gain. It is race-baiting, not the particular race bated, that really matters to Democrats.

Democrats are equal opportunity opportunists.
Posted by mregnor at 6:00 AM