An interesting observation by W. Kurt Hauser, an investment economist who 15 years ago pointed out a surprising fact: the federal revenue from taxes in the U.S. has been remarkably constant at 19.5%-- give or take a couple percent-- of GDP each year since 1950. This is despite substantial increases and decreases in the top tax rates, which ranged from 91% to 35%. 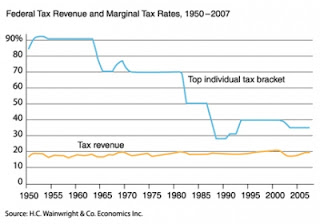 What Hauser's law means is that raising or lowering taxes at the federal level has no impact on federal tax revenue. When taxes are raised, people find ways to not pay taxes. When taxes are lowered, people pay more taxes. In the end, it's a wash.

What does influence federal tax revenue is the GDP. Nineteen-point-five percent of a bigger pie is more federal revenue. A vibrant economy brings in more tax revenue.

The government does better when, and only when, the people who work do better. What a surprise.

So how do we increase GDP? Of course, the most effective way to increase economic activity is to cut taxes, which, as Hauser points out with actual data (not just theory), does not alter the percent of GDP the government collects in tax revenues. Increasing economic production by lowering tax rates brings more money into the federal coffers.

In case you missed it:

You might ask: why isn't this simple fact-- tax rates don't change the percent of GDP that the government collects in taxes-- widely known? Thank the lefty mainstream media for burying this inconvenient truth. But a recent political event may change just what the MSM can shove down the memory hole.

With Romney's nomination of Paul Ryan, expect Hauser's law fact, and a host of other simple facts, to be at the center of the presidential campaign this year.

This election will be about facts.
Posted by mregnor at 6:00 AM