BREAKING NEWS: Hollywood actress announces that she is attracted to people most like herself... 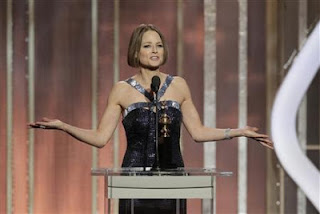 Jodie Foster comes out as gay at Golden Globes

"(Reuters) - Hollywood actress Jodie Foster confirmed long-running speculation that she is gay by coming out at the Golden Globes awards on Sunday, but joked she wouldn't be holding a news conference to discuss her private life.

The notoriously private Foster stunned the audience of stars and Hollywood powerbrokers..."


"Notoriously private...", except when she gets on an actual podium and announces her sexual practices to the world.

Besides, I already knew she was gay.
Posted by mregnor at 6:00 AM