From Bill Jacobson at Legal Insurrection:

District of Columbia Attorney General Irvin Nathan issued a lengthy lettertoday explaining the decision not to prosecute David Gregory “despite the clarity of the violation of this important law,” despite rejecting NBC’s claims of a subjective misunderstanding of the law, and despite vowing vigorous enforcement of gun laws.

Emily Miller of The Washington Times, who has written extensively about the overly aggressive enforcement of D.C. gun laws, including as to high capacity magazines, reacted as follows:

"It is shameful that the politicians running the nation’s capital have sent the clear message that there are two systems of justice in the city: one for the rich and powerful and one for everyone else."


Just to rub salt in the wound, here's a picture of Attorney General Irvin Nathan taken in 2011 with Beth Wilkinson, with whom Irvin participated in a mock trial for the D.C. Shakespeare Theatre Company, at a party: 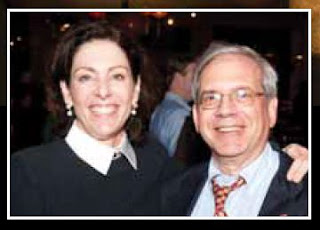 Beth Wilkinson is David Gregory's wife, with her arm around the Attorney General who would let her husband walk “despite the clarity of the violation of this important law”.

Friends will be friends. No conflict of interest there.


In 2006, Fannie Mae recruited Wilkinson as parts of its effort to rebuild its relationship with regulators after accounting scandals and complaints about its corporate culture. Her compensation at Fannie Mae was not disclosed when she was hired.[7] She served asFannie Mae's executive vice president, general counsel and corporate secretary from February 2006 until September 2008.[8]

She resigned her position at Fannie Mae along with three other senior executives on September 19, 2008, after the troubled mortgage giant was taken over by the government.[9]

Mrs. Wilkinson-Gregory was no doubt paid handsomely (how many million? Guess-- it's fun!) with your money for her work "to rebuild [Fannie Mae's] relationship with regulators after accounting scandals".

Gregory's wife shilled for the Fannie Mae crooks who brought our economy down. And made a pretty penny doing it. And of course her husband, as moderator on Meet the Press, reports on the economic collapse regularly, not mentioning that his wife made a ton of money working for the swindlers who caused it.

Connections. Laws are for the little people.
Posted by mregnor at 6:00 AM