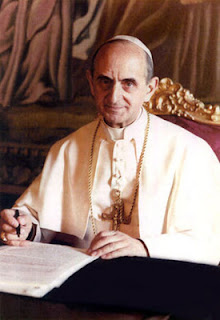 On December 20, 2012, Pope Benedict declared Paul a Christian of “heroic virtue,” granting him the title, “Venerable.” Paul VI is now one approved miracle away from beatification, and a second from formal canonization...

Against a world (and even Church) largely seduced by the errors of the sexual revolution, Paul publishedHumanae Vitae, the most prophetic papal document of modern times, and certainly one of the bravest. He upheld and championed priestly celibacy; re-affirmed and explained the importance of an all-male priesthood, while advancing the true dignity of woman in all other ways; issued a clear declaration on sexual ethics, and a decree against abortion and on behalf of life. Both John Paul II and Benedict built upon his teachings, and extended them to the modern world.

Pope Paul VI has been called a weak and indecisive pope, but no one who lacked true courage could have issued the powerful statements he did, or done so under the circumstances he faced.


Humanae Vitae is the most courageous and prophetic document of modern times. Venerable Paul VI defied the zeitgeist of the 20th century to tell the truth about sexuality. I pray for sainthood for this brave and holy Pope.

An excerpt from Humanae Vitae, on the consequences of contraception:

Responsible men can become more deeply convinced of the truth of the doctrine laid down by the Church on this issue if they reflect on the consequences of methods and plans for artificial birth control. Let them first consider how easily this course of action could open wide the way for marital infidelity and ageneral lowering of moral standards.

Not much experience is needed to be fully aware of human weakness and to understand that human beings—and especially the young, who are so exposed to temptation—need incentives to keep the moral law, and it is an evil thing to make it easy for them to break that law.

Another effect that gives cause for alarm is that a man who grows accustomed to the use of contraceptive methods may forget the reverence due to a woman, and, disregarding her physical and emotional equilibrium, reduce her to being a mere instrument for the satisfaction of his own desires, no longer considering her as his partner whom he should surround with care and affection.

Finally, careful consideration should be given to the danger of this power passing into the hands of those public authorities who care little for the precepts of the moral law. Who will blame a government which in its attempt to resolve the problems affecting an entire country resorts to the same measures as are regarded as lawful by married people in the solution of a particular family difficulty? Who will prevent public authorities from favoring those contraceptive methods which they consider more effective? Should they regard this as necessary, they may even impose their use on everyone. It could well happen, therefore, that when people, either individually or in family or social life, experience the inherent difficulties of the divine law and are determined to avoid them,they may give into the hands of public authorities the power to intervene in the most personal and intimate responsibility of husband and wife.

Consequently, unless we are willing that the responsibility of procreating life should be left to the arbitrary decision of men, we must accept that there are certain limits, beyond which it is wrong to go, to the power of man over his own body and its natural functions—limits, let it be said, which no one, whether as a private individual or as a public authority, can lawfully exceed. These limits are expressly imposed because of the reverence due to the whole human organism and its natural functions, in the light of the principles We stated earlier, and in accordance with a correct understanding of the "principle of totality" enunciated by Our predecessor Pope Pius XII.

The Church was and is right about sexual morality, and specifically was right about contraception. The Pill has ushered in a fundamental change in civilization-- a tipping point. By every imaginable measure of human sexual well-being-- divorce rates, marriage rates, rates of sexually transmitted diseases, rape, sexual abuse and molestation, pornography-- the Church's warnings about the consequences of contraception were obviously right.

The irony, of course, is that the people who got it right, and still get it right, are ridiculed and despised for their wisdom.