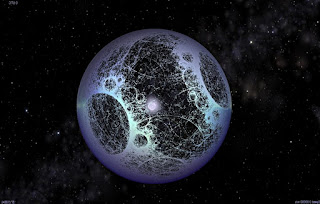 
I must admit that I enjoy reading this stuff-- SETI and all that. I love science fiction.

But it's fiction, not science. There is no evidence whatsoever for the existence of alien life. We have no reason whatsoever to suppose that it exists-- we haven't detected it, we don't know how life arose on earth, we have no idea what form life would take elsewhere, etc.

What's amazing is the patina of science that "astrobiologists" and SETI researchers have painted over this storytelling.

Speculation about alien civilizations is atheist eschatology-- salvation, heaven and hell. We will be saved or destroyed by advanced civilizations from other galaxies. We already have the atheist creation myth-- Darwinism-- as well as a theology of original sin and atonement-- environmentalism.

Speculation about alien civilizations is a religion. It differs from other religions (Christianity, Judaism, Islam) in that there is abundant evidence for the truth of various aspects of the monotheistic religions.

There isn't a shred of evidence for alien civilizations. Nothing. Speculation about it is fiction at best, paganism in the scientific age.