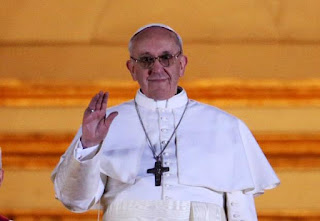 Cardinal Jorge Mario Bergoglio of Argentina has been elected the 266th Pope of the Roman Catholic Church. He has chosen the name Francis I, in clear reference to St. Francis of Assisi.

The Holy Father has a reputation for deep humility and holiness, and he has been a tireless advocate for the poor. He is also the first Jesuit pope.

May the Lord strengthen him for the work he faces, as He has blessed us with the election of this holy man.
Posted by mregnor at 3:53 PM