"The Pope We Need" 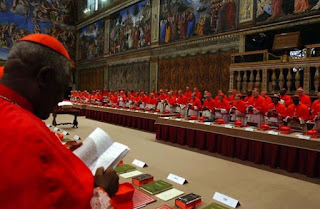 Russell Shaw expresses my sentiments about the Conclave to elect our next Holy Father, which will begin on Tuesday March 12th.


... by all means let the next pope be nice--and a great deal more. Let him have the charm of John XXIII, the earnestness of Paul VI, the charisma of John Paul II, the intellectual brilliance of Benedict XVI. But above all let him be a brave teacher of Catholic truth in the face of all the demands that he be something less.


The secular world is raging at the Church. Vatican II was a sublime reconfiguration of the face of the Church to the world. It was an engagement of Catholic truth to the world in terms the world could better understand.

Indeed the world does now better understand the Church and Her Message-- Christ is the last best hope-- the only hope-- of man. The world's response to this plain truth in the past half-century has been slander and unfettered fury.

We need a wise and stalwart pilot at the helm of our beloved Bark.

Please pray that the grace of the Holy Spirit will guide the Cardinal electors in their sacred duty.
Posted by mregnor at 6:00 AM