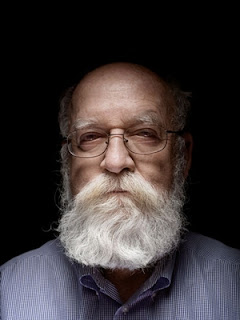 I find it difficult to write about Daniel Dennett.

Dennett, in case you have not had the opportunity to get to know his work, is a philosopher from Tufts University. Dennett is an atheist, and is one of the Four Horsemen of New Atheism-- along with Richard Dawkins, Sam Harris, and Christopher Hitchens.

Dennett's primary interest in philosophy is philosophy of the mind. He has written several books on the mind, including Consciousness Explained and The Intentional Stance.

So why do I find it so hard to write about Dennett? He is perhaps the most evasive and incoherent philosopher I have read. He rambles endlessly, and just as endlessly delights in bizarre conceptual constructs that serve only to obscure the topics he feigns to investigate. He is perhaps the most shameless sophist I have encountered, although Hume would give him a run.

Dennett, as you might imagine, is enamored of Darwin (he famously described Darwinism as "the best idea anybody ever had"), and his philosophy of mind is strictly materialist, to the extent that it is strictly coherent, which I will allow only for the purpose of discussing it.

He utterly denies the reality of qualia, which is the subjective experience of a sensation-- the "what it is like" to experience something. The feel of pain, the smell of coffee, the sight of red are each a quale. Qualia are notoriously difficult to explain materialistically. How can meat (the brain) "feel" anything. We can explain input, output, processing, behavior using material concepts of synapses and neurons, but how can we explain how it is that we feel something. No part of materialist science is subjective. Materialist science is objective, and seems incapable of explaining subjective experience. Dennett dismisses qualia rather abruptly as incoherent concepts, not really amenable or even worth philosophical investigation. This of course is convenient for a materialist, because it removes a huge philosophical obstacle to the materialist explanation for the mind. If qualia aren't real, that makes a materialist philosopher's job a lot easier.
Yet Dennett's dismissal of qualia, like Dennett, can't be taken too seriously.

Dennett still asks for novocain at the dentist, presumably.

Dennett takes the second bugbear of materialist philosophy of the mind just a little more seriously. Intentionality is the property of the mind that refers to the "aboutness" of a thought. Material things are, of course, themselves (philosophers love to say things like that), but they are not inherently "about" anything. Imagine an uninhabited world, with a seashore. Imagine that the waves arranged a few of the pebbles on the seashore in the shape of the word "Hi". If there were no minds in this uninhabited world, the rocks arranged as "Hi" wouldn't be "about" anything. They wouldn't mean anything. They would have no intentionality.

But in an inhabited world, rocks arranged as words might mean something, depending on the agent that arranged them. Perhaps it was a greeting made by a child playing on the beach before you arrived. Perhaps the arrangement was made by a mind.

Dennett's materialistic explanation for intentionality is, like his oeuvre, muddled, and he managed to get an entire book out of the muddle.

Succinctly, Dennett believes (of course) that intentionality can be explained in entirely materialist terms. He proposes that we assess things in our experience in terms of "stances", which are assumptions we make about them based on our experiences with them and on our survival needs vis a vi them. We assess inanimate objects via a physical stance, we assess designed objects via a designed stance, and we assess living things via an intentional stance, in which we attribute meaning and predictability to its behavior.

Although Dennett seems to believe that he has gone a long way to explain intentionality using materialist presuppositions, it should be fairly obvious that such hand-waving does nothing to explain how it is that a physical system-- a brain for instance-- could generate the "aboutness" that is the hallmark of the mind.

Dennett evades the fundamental problem with the materialist explanation for intentionality by conjuring analogies between the mind and computers and natural selection. Yet he evades the obvious: materialism shipwrecks on intentionality. Matter provides no meaning without mind. So how can mind be mere matter?

The intentionality conundrum is solved, in my view, only by hylemorphism, which is the traditional Aristotelian view of nature as comprised of substances, which are themselves composites of matter and form. Form is the intelligible principle of a thing, and the "aboutness" of a thought is the consequence of the incorporation of the form of the thing into the mind, which is itself a form.

I'll try to post more about Dennett when I can. Perhaps for Lent, as part of my penance.

I met Dennett at a seminar a few years ago, a story worth telling, soon.