"It was a sad day for the moonbat community" 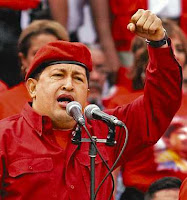 Howie Carr sums up my feelings on the passing of the Venezuelan Dear Leader:

Poor Joe Kennedy, mourning the loss of his grand amigo, “El Comandante,” the tinpot Latin American thug who put the “profit” back in “non-profit” for the Kennedy kleptocracy.

How can Hugo be dead, Joe? He went to Cuba for medical treatment. They took him straight to the hospital from the airport in a DeSoto ambulance.

“President Chavez cared deeply about the poor … while some of the wealthiest people on our planet have more money than they can ever reasonably expect to spend.”

Damn right, comrade! Es verdad. For the  record, according to 2011 tax filings, Comrade Joe made $901,236 from Citizens Energy and related corporations. His lovely bride, Beth, grabbed another $346,764.

Now the jockeying begins. Who will lead the Massachusetts delegation to the funeral in Caracas? Who will get top billing, the congressional delegation or the Kennedys, or do I repeat myself?

For some reason the sleazy Democrat pols around here have always had the hots for these Latin American Reds. Like his late boss Joe Moakley, Jim McGovern’s always had a crush on Fidel Castro. Maybe he’s jealous of all the hair. Joe K was always Chavez’s kept Kennedy, although Bill Delahunt gushed over him like a teenage girl infatuated with a mutant, pineapple-faced Justin Bieber.

The local solons are all going to have to find some new rear ends to kiss.
It was a sad day for the moonbat community. The People’s Republics of Cambridge and Amherst rushed to lower their flags to half staff first. A spontaneous candlelight vigil erupted in Muddy River. Funeral dirges played endlessly on the NPR stations, like Radio Moscow when Uncle Joe passed. Someone dimmed the lights at the Globe, causing an immediate panic in the newsroom, where the fops  assumed the newspaper was finally being shut down.

Yes, the media fell all over itself  lionizing the Mussolini   of South America. The AP hagiography was slightly longer than “War and Peace.” Talk about gushing:

The only thing the AP forgot to say about El Comandante was that he kept the drugs out of Southie.

Hey Joe Kennedy, when’s the next plane out to Tehran? I hear the mullahs are looking for a new shill.


What Chavez did to Venezuela is what the Left wants to do to us. They want power, and will step on anyone they have to to get it.

One of their hero thugs bit the dust, and they mourn.