"Rise up and walk" 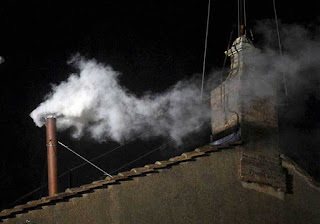 Walter Russel Mead has a deep insight into the election of Pope Francis to the throne of St. Peter:


G.K. Chesterton tells the story of the time that St. Francis of Assisi visited Rome and the pope of the day proudly showed him all the wondrous treasures of the Vatican. Referring to a story in the Biblical Book of Acts in which St. Peter spoke with a beggar in Jerusalem and told him he had no money, the pope pointed to the treasures around him and said, “Peter can no longer say ‘Silver and gold have I none.’”

St. Francis’ response: “Neither can he say, ‘Rise up and walk.’”

... St. Francis’ point was that the triumphal, institutional church of his day was prestigious and wealthy, but it had lost the inner fire and dedication that made Christianity a world-transforming faith.

So now we have a Pope Francis, and we are about to see what he can make of the papacy, and whether the Catholic Church in his day will be able to rise up like the beggar and walk. In some ways, Francis was a typically canny choice by the oldest electoral college in the world.


[W]hat we know of [Pope] Francis’s ministry in Argentina suggests that he knows that in Christianity doctrine, important as it may be, is not the heart of the matter. Christianity at the end of the day is about God’s all-forgiving, all-embracing, illimitable love. Love is the chocolate, doctrine is the box and the point of the doctrine is to protect the chocolate and keep it fresh for use, not to separate people from the feast God wants us to share.

[Pope] Francis famously attacked, for example, the practice of some Argentinian priests who put obstacles in the path of single mothers seeking to baptize their kids. The then Cardinal Bergoglio’s response was pretty much what one suspects Jesus himself would say. As the Telegraph reports:

“In our ecclesiastical region there are priests who don’t baptise the children of single mothers because they weren’t conceived in the sanctity of marriage,” Cardinal Bergoglio told worshippers last year.

“These are today’s hypocrites. Those who clericalize the Church. Those who separate the people of God from salvation. And this poor girl who, rather than returning the child to sender, had the courage to carry it into the world, must wander from parish to parish so that it’s baptised!”

Recognizing a young unwed mother as a moral hero because she doesn’t get an abortion won’t win Francis many points with those who think there can’t be too many abortions (especially among the poor) in this wonderful world of ours, but this is the kind of perspective the Catholic Church, and indeed any human community, badly needs. And if one consequence is that more pregnant young women find networks of support and solidarity as they choose to bring new life into the world, [this blogger] for one will think an important corner has been turned.


A Pope who will turn the Church even more to the ways of St. Francis may well be the blessing for which we have prayed.